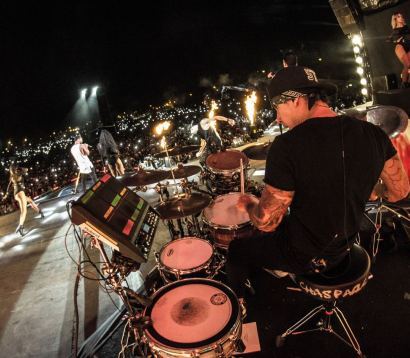 Better known as "Titi", 35-year-old Miguel Angel Ortiz is a Colombian M.Sc engineer and drummer with over 20 years of experience in music performing, more than 38k followers on his Instagram account (https://www.instagram.com/titidrums), more than 12k followers on TikTok (https://www.tiktok.com/@ttdrums) and more than 40k suscribers and almost 8 Million views on YouTube Channel (https://www.youtube.com/user/titiortiz).

With a self-taught musical background, he managed to be part of the city’s music scene from an early age by participating in “Rock a Parque”, the largest free festival of rock in Latin America, being only 14 years old.

With recognitions as Best Performer of Rock al Parque in 2006, a Subterranica Award as best drummer in 2010, this Colombian drummer has positioned itself as one of the leading interpreters of the country. For this reasons Titi was invited on 2015 as a performer on the Pegate al Parche drum clinic, next to Derek Roddy, Dom Famularo, Eric Moore, James Murphy, so as the most recognized Colombian drummers. Additionally Titi is one of the promoters behind the "Bateristas de Colombia" (https://www.facebook.com/bateristasdecolombia) initiative, created with the sole intention of making visible the work of Colombian drummers.

Titi is currently the touring drummer for Colombian multi-platinum artist Maluma. With over 60 million followers on Instagram (https://www.instagram.com/maluma), this 28-year-old artist has become the latinamerican artist with most followers on Instagram and a music phenomena with huge impact in the media around the world.

At just twenty-six years old, Juan Luis Londoño, better known by his stage name, ‘Maluma’, (composed of the first letters of the names of his mother, father and sister), has become one of the Artists with the greatest impact on urban music and the youth idol of Latin music globally. Winner of the Latin Grammy 2018 to the Contemporary Pop Vocal Album (by F.A.M.E.) Maluma is one of the most popular singers with active fans on social networks and the leader among Latino male singers with over 49 million followers on Instagram. This figure adds to more than 23 million fans on Facebook, 6 million on Twitter, and 22 million subscribers on their YouTube channel.

In 2017, he presented 105 concerts in Latin America, the United States, Europe and Israel, selling more than 1 million tickets on his MALUMA WORLD TOUR 2017 and becoming the Latin artist who sold the most concert tickets in 2017. In 2018 and 2019, he broke a record with full totals in all his concerts in the United States and Europe with his FAME World Tour and 11:11 World Tour filling Madison Square Garden (New York), American Airlines Arena (Miami) and two The Forum (Los Angeles) among others.

In 2019, he sold out tickets at the largest stadium in Israel, the Yarkon Park in Tel Aviv with more than 60,000 spectators; He made history at the 18th Annual Mawazine Festival in Rabat, Morocco, setting an all-time attendance record as the protagonist of the concert in front of 200,000 people; and first appeared in Riyadh, Saudi Arabia before 25,000 people.

Since signing with Sony Music Latin in 2015, Maluma has released three albums that have debuted at # 1 on the Billboard Latin Albums list: Pretty Boy Dirty Boy (2015), F.A.M.E. (2018) and 11:11 (2019). Maluma is the youngest artist to simultaneously obtain # 1 and # 2 on Billboard’s “Latin Airplay” list (“Sin Contrato” and “Chantaje”) and only the sixth to achieve it. To date, Maluma has fourteen # 1 hits on Billboard’s Latin Airplay list.