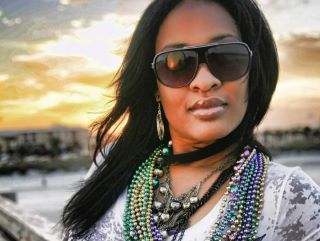 Whether your favorite entertainer catches a Hail Mary pass for the winning touchdown, sings sensuous lyrics to packed audiences or portrays the leading role in the season’s hottest feature film, their power and respect yield great responsibility. Even if many of these influential individuals neglect to assume the obligation, they still have generations of admirers looking up to their every move with gazing eyes.

Sultry soul/ R&B songbird Sumeka takes these commitments as a role model with the utmost seriousness via her every heart-touching lyric. Her formula for meaningful messages has won over faithful fans from all walks of life with her UffaMe Records debut album Who Am I? (I'm Me) released in early 2011.

And Sumeka vows to keep her supporters duly satisfied with her follow-up album Beauty Is due spring 2012. Through her lead single “Who Am I” guiding the pathway to future success, Sumeka is well on her way to uplifting us all with good, quality music.

“My motto is message over the music so it’s positive and inspiring lives,” she explains. “At the end of the night, when you lay your head on your pillow and remember the messages in my songs, then I have accomplished what I needed to. That message will stay with you for the rest of your life.”

Born in the sleepy town of Welsh, La., some 22 miles from Lake Charles, this multi-talented musician has been singing since the tender age of three. Raised in a family of vocally gifted relatives, she penned her first song when she was only 12.

“Welsh is very family oriented. Everybody knows everybody. We had only one caution light in town,” she recalls. “The elementary school was connected to the high school. The only thing that separated the two sides of town was the tracks.”

Never really focusing on her God-given talents of writing and singing, she left her small town comfort zone just three months after high school graduation and joined the Navy. The entire time she spent enlisted, melodic melodies rang in her head.Not long after discharging from the military and planting her feet firmly on solid ground, she began writing and recording.

When she felt that her craft had been perfected, she introduced her debut single "Who Am I" to the city of Jacksonville during the summer of 2010. The song was broadcast live on local station 93.3FM The Beat and unsurprisingly, it was a runaway smash. Listeners poured in requests to the radio station to play the record, which earned her regular rotation on the Clear Channel broadcasting network.

Her follow-up single “Torn” got just as much popularity, prompting her debut album to
Who Am I? (I'm Me) to receive worldwide recognition via online stores.

Without question, Sumeka’s passion is to inspire others to become the best version of themselves that they can possibly be and she does that through the gift of music. Blessing listeners with powerful records that empower females all across the globe, that is exactly what the self-proclaimed “Louisiana Cajun Princess” does on her UffaMe Records sophomore album Beauty Is due spring 2012 and lead single “Who Am I.”

My music is different. I don’t try to sound like anybody and nobody can sound like me. It’s all Sumeka,” she insists. “I’m not influenced by anybody else. My sound is unique and original. It’s nothing that anybody has heard unless it’s coming from me. You’ll love my music when you hear the songs, but the message is what you will remember.”

"Beauty In Me" Video release

Be on the lookout for "Beauty in Me" official video release party as well as an evening of spectacular performances ; )

Come and check out Sumeka along with very talented upcoming artists in Jacksonville as they make this a night to rememer filled with Beautiful Musical Performances @ V.I.P Lounge in Jacksonville, FL hosted by Centerstage Jacksonville! You don't want to miss this!!!!!!

Come out and experience an evening of Beautiful Music hosted by Centerstage Jacksonville. You don't want to miss this!

Come and check me out in this Life changing stage play!

Playwright Liz Turner has done it AGAIN with a new stageplay titled "Let Not Your Heart Be Troubled." Brian & Toya were never church goers or actually believed in God. They felt like they were sitting on top of the world because they had a lot of money in the bank, bills ...paid on time, nice cars, fabulous home & a host of friends. But what happens when that all comes to an end? Brian & Toya’s bank accounts went into the negative, bills got behind, cars repossessed, home went into foreclosure & alm...ost all of their friends have left them hanging dry except two, Pryce & Linda. Brian & Toya put their friendships with Pryce & Linda in jeopardy when life was grand for them & eventually they departed & went their separate ways. Everyone handles life changing situations differently. They tried going to their families for support & even attempted to get back out there & make things happen with no positive results. They even thought about giving up on life & turn to drugs, alcohol & crime. Yea, it’s true, life throws us curveballs but we must always have our catchers mitt ready. There’s one way for them to get out of this terrible situation but are they ready to grasps hold of the hands that have always been there for them for years, even when they ignored it?