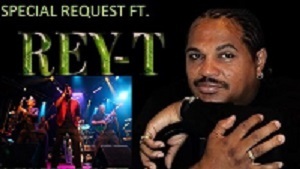 Please allow me to introduce to you, Grammy Nominated Recording Artist

“SPECIAL REQUEST FT. REY T” has reached out to the world with their music in Tours, Special Events, Festivals, Television, Movie Soundtracks and many other venues both in America and Abroad.

“SPECIAL REQUEST FT. REY T” have Toured the World of Japan for (6 months) and have toured the Chitlin Circuit as the opening act for Sir Charles, Sir Ronnie Love and Denise LaSalle amongst others.

“SPECIAL REQUEST FT. REY T” is one of the most sought-after groups in and outside of California performing at The Festivals, Fairs, Casinos, Venues, Car Shows, Wedding Events, Summer Concert Series and much, much more!

“SPECIAL REQUEST FT. REY T” - The live performance is something you would not want to miss. They hit the stage with the level of energy that tantalizes and rocks any crowd, bringing them out of their chairs. They have performed for thousands of individuals, making them one of the most requested entertainers in all of California.

They have a unique Lead Singer with a combination of hot vocals, a dynamic stage show, and a dynamic rhythm section. They have the style and showmanship that causes the audience to participate to the extent that the performance leaves them feeling as if they were part of the show!

FAIRFIELD, Calif. - Nov. 23, 2015 - PRLog -- Grammy Nominated Singer, Song Writer, Producer and Entertainer Rey T has released a new single entitled " 99 Women " which is the 1st of many from the forth-coming CD entitled " Your Body " on the MRE Entertainment/Prime USA Records label and it's already getting airplay around the world racing up the charts.

Rey T along with SpeCial ReQuest has already released Two (2) CD's this year entitled "Down & Out and Play My sh__" with a third CD scheduled to be released on December 4, 2015 entitled " The After Party ", all three (3) CD's are getting massive airplay around the world. Down & Out has reached #17 on the Independent Music Network charts with no signs of slowing anytime soon!

Rey T has written and produced new music for other artists including " Xymphoni " who is nominated for Grammies in 5 categories in 2015, he's also written for new comer "Finesse The Entertainer " who's CD was released on 11/10/2015, adding their name to the list is Blues legend "Prince Ronnie Love" who is preparing to work with Rey T on his up and coming project.

SpeCial ReQuest Ft Rey T is also promoting their new projects at various venues across the country while preparing to hit the road with the legendary " Ohio Players " and they are adding dates for 2015/2016 bringing to you one of the hottest shows on the circuit. Rey T who's days are completely booked playing venues, producing new music, shooting videos and trying to maintain a family life says he wouldn't have it any other way as he lives and breathes music and can't wait to present his music to the world gaining new fans here in the states and abroad.

99 women is a tribute to all women that are not afraid to go the extra yard to assure that their loved one is more than satisfied whether she's a CEO, Doctor, Factory Worker, Pilot or whatever they need her to be for she can be 99 Women all rolled up into one!

Listen for the hot new single from Rey T on your favorite radio station be it AM/FM, Internet, XM or Sirius you won't be able to stop listening to this song as it tells it plain and true!

Rey T is the real deal and proves that he is here to stay and he is just what the doctor ordered to soothe your trouble mind!