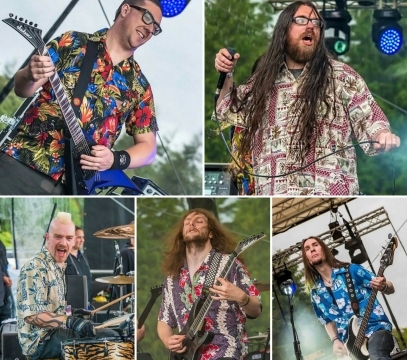 Formed in 2009 by ex members of Punk Bands 4ft fingers and Gash, Reign of Fury wasted no time in establishing a name for themselves.
Since the release of their critically acclaimed debut album “World Detonation” released by Mosh Tuneage (UK) and Good Life Recordings (Europe) in 2012 Reign of Fury have become one of the most impactful new live bands around.

Career highlights to date include two Bloodstock Festival appearances, the second of which gave the band the prestige of opening the whole festival on the Sophie Lancaster stage. Personally planning and hosting two annual tours for charity “Headbangers Balls” in aid of the Teenage Cancer Trust, featuring bands such as Hatebreed, Onslaught, Xentrix and Lawnmower Deth. The band have toured extensively over the last year and shared stages with the likes of Sepultura, Death Angel, M.O.D, English Dogs, Stamping Ground as well as playing a room packed set at Hammerfest

Over the last year Reign of Fury have been touring their exceptionally well received second album “Death Be Thy Shepherd”, released by Mosh Tuneage (U.K) and Static Tension (U.S. and Canada), whose vinyl release was Kickstarter's fastest funded album for an independent band, reaching their goal in just 11 minutes.

Reign of Fury are also now members of the TBFM Hall of Fame.

" Ferocious modern thrash with fucktons of old school spirit, Reign Of Fury make my neck hurt and I love it. ­ " DOM LAWSON - METAL HAMMER / THE GUARDIAN "

“ Death Be Thy Shepherd is a great record­ " METAL HAMMER

In early 2016 Paul Bielby left the band for health reasons and was replaced by Chris Musgrove. Then in mid 2017 Joey Jaycock replaced Ed Westlake on lead guitar.

The band are now working on their 3rd album "Exorcise Reality".

(Note: The Reign of Fury name and Logo is a Registered Trademark protected by Law)

After a couple of little obsticles in the road during 2017 we now have a full permanent line up again.Joey Jaycock has joined us as our lead guitarist and Chris Musgrove has replaced Paul Beilby on bass.

We are confident this is our strongest line up ever.

Writing our 3rd album "Exorcise Reality" is now under way and we hope to start the recording process early 2018 with a tour to support it.