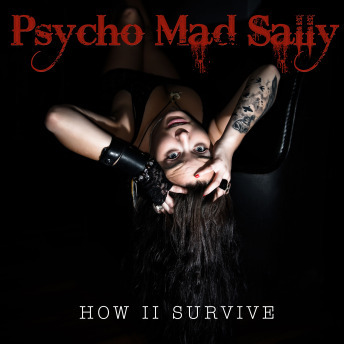 Psycho Mad Sally is an independent Grunge-Gypsy-Punk-Metal band. With extensivelive shows and appearances, the band has grown in sound, style, and strength, emerging as pioneers of an individual and energetic original voice that separates them from the pack. You won’t easily forget them.

Sasha Nevskaya is an energetic and magnetic performer with raunchy and earthy vocal chops. Sasha is a poet and a former Slam performer. She and her songwriting partner Andrei Sin, a local Rock N Roll/Metal guitarist and songwriter, teamed up in early 2010 and immediately began writing together. Andrei’s Romanian Rock N Roll precision and Sasha’s impulsive, Russian madcap spontaneity fueled intense performances that quickly captivated audiences in early shows. Andrei’s folk-Gypsy Romanian roots play an important role in the creative process. Combined with Sasha’s rowdy approach, it digs in.

The first EP “30 days (to pay the rent)” released in June 2011 was self-produced and recorded, and contains early gems like “Ash In my Whiskey”, “Lovedrunk”, and the anthem “Anarchia”. These tracks became rotation favorites on many podcasts across Canada and the U.S., like Tranquilizer Radio, Ruckus Radio, Toronto Sounds Good, Anarchy TV and many others.

The second EP “How II Survive”, released April 2013 shows significant growth for the band as they come closer… Strong songs, tight arrangements and kickass production by Sean Gregory brings order to chaos. The EP was recorded at TRH studios in Toronto with the aforementioned Gregory (Platinum Blonde, Rehab For Quitters, Hail The Villain) as engineer and producer.

Psycho Mad Sally are forever exploring and are guaranteed to bring down the house with an over the top energetic performance. Here to impress, not depress: Life is for the living.

Our Track "Silencium GAG" is featured on The Scene Magazine

Sasha Nevskaya (a.k.a. Psycho Mad Sally) sounds like the long lost younger and angrier sister of Lemmy Kilmister. It’s aggressive, heavy and distinct, so you’d better keep your eye on the ball when dealing with Psycho Mad Sally, she bows to no one!

Here is A recent review of Our Album "How II Survive"

And just when we were starting to think that Gogol Bordello was the only gypsy punk band that would ever blow our minds, this Toronto-based group went ahead and Eugene Hütz-ed us with this wicked tune. This track is off their most recent release How II Survive which you can buy as a name-your-price download

The opening band for the night, Psycho Mad Sally, produced an electic sound combined with that of the violin. I found their music style to be a bit at odds with this combo, and the gruff female vox only added more chaos to the foray. I have to assume that is their intention given the band name. Their bold, wild child vocalist unleashed her antics on and off stage. Mad as a hatter I tell you. This band won a spot at the semi finals.