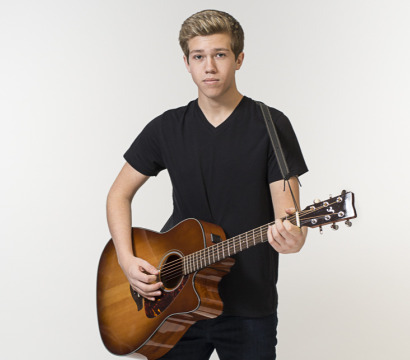 Nathan believes that hard work, dedication, perseverance, positivity and a desire to excel and succeed can make dreams come true. At sixteen Nathan is realizing his dreams. Last Fall, Nathan’s most recent single “Feels so Right” caught the attention of an LA record producer and 2015 started out with a bang! Nathan is now signed with Los Angeles based, multi-awarding winning, Grammy nominated Record Producer/Songwriter Greg Wells! Nathan is thrilled to be creating new music and taking his songwriting and singing to an exciting new level.

Nathan was born and raised in Peterborough where he began playing guitar at age seven and singing at age ten. Songwriting came along at fourteen and was driven by his struggles with bullying, which is reflected in some of his original songs (Be the Change, Beautiful Beneath). He attends Thomas A. Stewart Secondary School, enrolled in the Integrated Arts Music Program and enjoys playing electric and bass guitar in the award-winning Jazz Band and Wind Symphony.

Some of Nathan’s accomplishments and experiences over the past year include winning Peterborough SNOFEST IDOL 2014, where he wowed the judges and audience with two of his original songs. He was the youngest in the competition and the only one to perform original music.

Not long after in March, Nathan was featured on YTV’s The Next Star SUPERGROUP as a Top 30 Finalist! He was chosen from thousands of auditions across Canada. He filmed the reality series during Summer 2013 and worked with top industry professionals, giving Nathan TV exposure across Canada. In addition, Nathan played the role of lead extra in two music videos for the YTV Network television series “The Next Star” in Toronto. Nathan showcased his acting and guitar skills on the set of this national TV network.

Nathan is honoured to be a two-time nominee (2014 and 2015) for RISING STAR at the WIRE AWARDS. He just WON RISING STAR for 2015!!! The Wire Megazine also featured Nathan in the Music on the Rise column in the September 2014 issue.

From 2013-14 Nathan was signed with STRUTT Central Talent and Modeling Agency. He modeled in the STRUTT 4 KIDS Five Counties Children’s Center fashion show fundraiser in 2013 and 2014. Nathan also was the solo VIP performer for the 2014 fundraiser at Market Hall.

During his time with STRUTT Nathan auditioned in Toronto for various acting opportunities. He was cast in a National TV commercial which airs on the French television networks for ROGERS NHL and also did two print campaigns for ROGERS. One of his highlights was being cast as a FEATURE LEAD as a "best friend" in a SHAWN MENDES MUSIC VIDEO “Something Big” which is viewed all around the world. This video was also used in a VIRGIN Radio Commercial which aired daily on National TV networks including the Global New Year’s Eve at Niagara Falls, JUNO’s and Super Bowl!

Nathan is a regular musician at a few local venues and performed at the Peterborough Exhibition and Gravenhurst Legion 75th Anniversary Parade. Nathan also booked live performances with various radio stations, including celebrity guest appearances on the 100.5 KRUZ FM and ENERGY 99.7 FM Live morning shows. CKAR 88.7 FM and ENERGY 99.7 both have played Nathan’s single “Beautiful Beneath” on air. He has also been a guest performer on two Cogeco tapings of the Junction 28 cable show.

Volunteering is important and Nathan enjoys giving back to the community and helping local charities by performing at fundraisers. Using his music to CONNECT TO THE COMMUNITY and MAKE A DIFFERENCE is very important to Nathan.

Nathan is a Youth Ambassador for the local Just BeYOUtiful Campaign which tours local schools and camps to promote self-confidence, inner beauty, volunteerism and anti-bullying. Nathan performs and speaks to students about these important issues. Nathan is also a Youth Mentor with the monthly “Boys Camp” days. Nathan’s debut single “Beautiful Beneath” was inspired and written for this campaign.

Between school, bands, writing music, volunteering, playing gigs around town, travelling to LA, and having fun being a teenager, Nathan is a busy young man. Exciting things are happening! This teen is on the move! Stay tuned….!