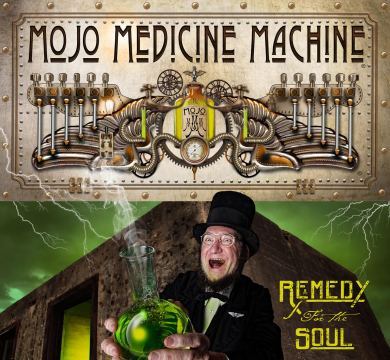 MOJO MEDICINE MACHINE began in 2016 and was the collaborative vision of two good friends and band mates – Rick and Pete. The musical direction is based on SOULFUL ROCK’N ROLL, HEAVY BLUES, R&B and FUNK.

Their debut album entitled "REMEDY FOR THE SOUL" was recorded at the iconic Royal Studios (Royal Records) in Memphis, TN and was produced and engineered by Grammy Award-winning producer LAWRENCE ‘BOO’ MITCHELL. Creating this awesome music inside Royal Studios was pure magic and an honor for the band since it is where so many greats like AL GREEN, KEITH RICHARDS, PAUL ROGERS, MELISSA ETHERIDGE & many others made their mark.

The band draws from a multitude of influences and styles ranging from Rock'n Roll, Motown and R&B to Jazz and Funk… all of which contribute to their sound, onstage mojo and stellar live presentations. MOJO MEDICINE MACHINE captures the Memphis / Mississippi vibe while definitely crossing international borders!

Promoting the success of MOJO MEDICINE MACHINE and their newalbum is top priority by touring with their highly energized show! MOJO MEDICINE MACHINE'S charismatic look, sound, and live presentation set them apart from the rest of the pack. BE SURE TO CATCH THIS ROCK'N ROLL, GROOVE EXTRAVAGANZA… AND ONCE YOU DO YOU'LL KNOW YOU'VE BEEN ROCKED BY THE REAL DEAL!!!

Please visit us online at:
www.facebook.com/mojomedicinemachine

Mojo Medicine Machine would like to give a warm welcome to Kenny Long on keyboards.  Kenny makes a fantastic addition to the MMM family!  Welcome Kenny!!

REMEDY FOR THE SOUL cd drops

THE DEBUT CD FROM MOJO MEDICINE MACHINE, "REMEDY FOR THE SOUL", DROPPED TODAY, TUESDAY SEPTEMBER 5TH.  YOU CAN GET YOUR COPY BY VISITING  THE BAND'S STORE @ www.mojomedicinemachine.bigcartel.com
Head on over and get your copy today.
T-SHIRTS COMING!!

Okay we are in the home stretch good people. As we stated in earlier posts, pre-ordering the cd also came with an 8x10 color autographed print of the band....for a limited time only. THE LIMITED TIME OFFER WILL END NEXT FRIDAY AUGUST 4TH AT MIDNIGHT...... SO IF YOU HAVEN'T ORDERED YOUR COPY YET, NOW IS THE TIME TO DO IT!
All of us in Mojo Medicine Machine would like to THANK YOU for the overwhelming response to pre-ordering our debut cd REMEDY FOR THE SOUL. Stay tuned for show/tour dates.
Just click on the link below to order your copy now. Thank you!!

Pre-order REMEDY FOR THE SOUL

THE MOMENT HAS ARRIVED!!!!
AN EXTRA SPECIAL"EARLY BIRD' CD PRE-ORDER OFFER!!! Click on the "Music" link above to listen to a couple of sound clips.

HAPPENING NOW!!!! THE CD IS ONLY $15 (In the USA-$25 Everywhere else...INCL.SHIPPING & HANDLING) AND WILL BE DELIVERED STRAIGHT TO YOUR DOOR IN 3-4 WEEKS.
***AS A SPECIAL BONUS FOR PLACING YOUR ORDER,,,,
YOU WILL ALSO BE RECEIVING A FREE LIMITED-EDITION,FULL COLOR,AUTOGRAPHED LITHOGRAPH OF THE BAND!!!!***THIS EXTRA SPECIAL PACKAGE IS BEING OFFERED FOR A LIMITED TIME ONLY! SO DON'T MISS YOUR OPPORTUNITY TO GRAB YOUR VERY ON PERSONAL COPY!!!!! CLICK ON THIS LINK>>www.mojomedicinemachine.bigcartel.com

Fronting the band and delivering the ‘mojo’ to the masses is Rick. He is a total showman either on or off the stage. When you meet Rick it is immediately apparent that he is very charismatic, dynamic and always ready to draw you in!

News Blast asked Rick his thoughts about being onstage and connecting with a ‘Mojo Medicine Machine’ audience. Rick states, “My personal approach to performing as a vocalist and as the front man is I always feed off the crowd. I interact and always look people straight in the eyes to make that connection! I want to give them an experience they will never forget!”

Drums Bring in the Groove!

Holding down the backbeat for the band is Pete. As we all know the drums play an important (but often overlooked) role in any band. This is NOT the case for this seasoned pro…!

When asked about his drumming style within the context of Mojo Medicine Machine Pete stated, “My approach to drumming is to simply let the song and music dictate what I need to do. My playing supports both the vocalist and the other band members… and I strive to strike a fine line of ‘just enough drumming’ to make the song work while staying out of the way of the other players. I'm just one piece of the collective puzzle.”

Pete’s grooves really set the mood and feel for each performance and you can experience this by observing the way the band really locks in with him onstage!

Vintage Gear Has the Mojo!

The musicians in Mojo Medicine Machine pride themselves on putting on a spectacular live show. A big part of their onstage charm and charisma can be attributed to the sound, look and vibe of the vintage instruments they use onstage.

News Blast asked the Machine’s guitar duo Hink and Motley what the draw and interest is in using vintage guitars over newer instruments. Hink stated, “Although there are some really great new guitars available… it’s the tone of the older guitars that really gets to me.” Motley added, “You can’t go wrong with classic vintage instruments. Vintage guitars simply have that special ‘mojo’ you can’t always get with newer guitars!”

Update Required To play the media you will need to either update your browser to a recent version or update your Flash plugin.
Download Download
Back

Contact Information
MANAGEMENT, BOOKINGS AND INFORMATION:
Please fill out the form to the right and submit.
Also visit us at: www.facebook.com/mojomedicinemachine
www.twitter.com/mojomedmachine