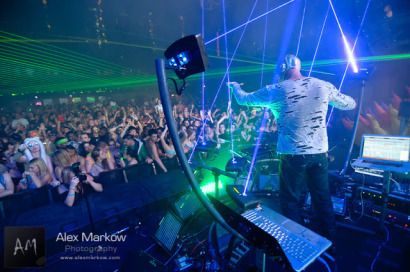 MOBIUS8 -- Electronica Performance Art Overview:  Experience space age orchestration of lighting, visual effects, and laser morphing to the beat of Mobius8's original and remixed dance tracks. John Laraio and his “Hydra”, the most innovative spatial instrument of its kind, come together as MOBIUS8-- a performance art event and “Electronic Jockey” “EJ” that translates motion into sound. With a solid background in various styles of music, MOBIUS8 is an experience like no other.

John recently composed the music for Guy Laliberte's show, Through The Echos. John and Guy also released three EPs together in 2020-21 titled "Eye Wonder", "Funkin Paradise" & "Into Your Tribe"

Mobius LLC is a company lead by John Laraio aka Mobius8; comprised of diverse and seasoned individuals formed for the purpose to bring more exposure and expand the Mobius8 (MOB8) brand and give the EDM fans a new experience. Mobius8, the consummate futurist, uses many laptops, series of infrared and laser beams to manipulate sound, lighting, video and laser fx all in real-time, using his own invention, a multi-headed, multi-media, interactive spacial instrument he named “HYDRA”. Mobius8 live performances offer a glimpse into the distant future... a real-time computer based interactive art form.