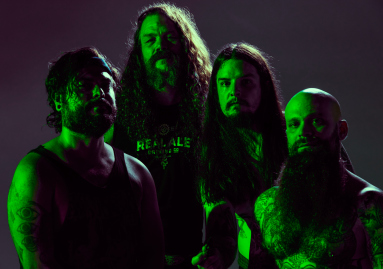 Greenbeard has made their mark on the stoner/desert rock scene with heavy, heady sounds and high energy. Formed in 2014, the Austin, TX-based band has been exploring sounds that blend early british heavy metal and psychedelica; big desert riffs and slow stoner grooves. Their upcoming release, Variant, meanders promisingly into “desert soul” territory, with bluesy interludes and heartstrung, crooning vocals.

Riding high on the early waves of the stoner rock renaissance, Greenbeard built up a solid fan base at big ticket festivals and intimate venues throughout the country. Their self-titled EP was released in 2014, boasting big desert energy and habit-forming tracks like “Dead Valley” and “Sludgito.” They quickly followed up with the 2015 full-length Stoned at the Throne, recorded at Ohm Recording Facility in Austin and mixed in L.A by Adam Hamilton (Brian Jonestown Massacre, Counting Crows, LA Guns). After a few tears across the States, the band set to recording their second full-length, Lödarödböl, in the Fall of 2016. Produced, mixed, and engineered with Matt Bayles at Red Room Recording in Seattle, Washington, the album brought them new levels of stoner rock pedigree.

Never content to simply stay the course, Greenbeard has continued to amp up their energy and showcase their range—both on stage and in the studio. They’ve traversed the edges of their genre and tred new sonic landscapes to conjure up something wholly familiar and yet starkly new. In 2018, they recorded a teaser-EP, Onward Pillager, with producer Jeff Henson of brother-band Duel. Henson’s Red Nova Ranch, located right outside of Austin, became the birthplace of the latest album. There, the band was able to log major studio hours right in their own backyards and nurture a new record like never before. Variant will make it’s official debut in Spring 2022 and Greenbeard has plans to tour heavily in support of its release via Sailor Records (US) and Kozmik Artifactz (EUR). -Janine Stankus

Mine and Mountain (Austin, TX)

Bands Supported:  ...And You Will Know Us By The Trail of Dead, Native Daughters, Sextile

The Far Out Lounge