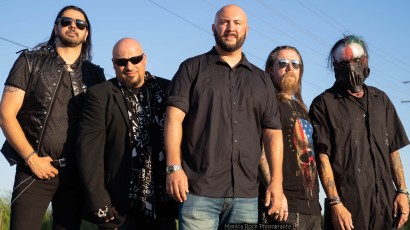 Failure by Proxy is an American rock band from Galt, California, formed in December 2017. Drummer Eric “SpAz” Lewis was new to the Sacramento music scene and was looking for to join a band with. The musical direction was never enough, so he and the former vocalist came together to form Failure by Proxy. SpAz knew They knew exactly who they wanted to lay the musical foundation. Lead Guitarist Chuck “Cash” Schubert, and Bassist and backing vocalist Chris “Gypsy Blade” Alosi.

The chemistry was instant, and they immediately began writing and within 6 months the band has released two singles, Not Gonna Break (2018) and In My Skin (2018). With the lineup complete and 8 songs written they were ready to start playing shows.

In November 2018 the chemistry of the band changed dynamically. Anthony “AntMan" reached out to see if the band needed another guitarist… The band was skeptical, and Chuck and Anthony are polar opposites when it comes to playing style, and that was the missing piece.

Mid 2020 FxP was faced with the departure of their singer. Looking to replace that position would not be easy. Auditions were held and the band unequivocally decided on Rob. Rob brought a whole new level to the band. With his diverse vocal ability, lyrically writing and stage presence, he truly rounded out the band like never before.