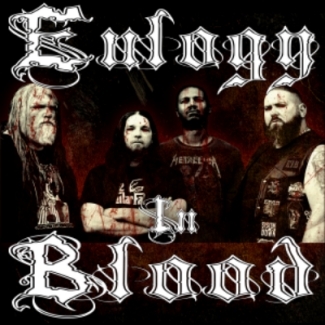 Eulogy in Blood is a metal band from Louisville Ky. Formed in April 2018 with the intent on unleashing its own brand of doom, sludge and thrash.
The bands soul intent is to show the world how ugly it really is!

Eulogy in Blood was founded after the Louisville native band DESCENTION had called it a day after 14 years. The remaining 3 members Chris Justice, Jay Shepherd and Marlon Griffon started writing new material for the new band. While writing new material Jay Shepherd's other band Hacksaw Vendetta also decided to part ways and the guys asked Scott Martin to join them. As a whole group Eulogy in Blood started the finishing touches on their music. With in 4 months the band had played their first gig being a local festival named Metal Fest.

The band draws from many influences such as bay area thrash, doom, sludge, death, grunge and hardcore. With a melting pot of sounds the band seeks to pave way for a new style by also paying homage to their fore fathers.

The band embarked on a tour in 2019 playing from Tampa, FL to Cave in Rock, IL to support the new EP "Human Stain".

Due to the state of things during the course of 2020 the band was forced to take a break from shows much the same as everyone else. With all that was going on in the world and in Kentucky in general at the time the band knew it was time to concentrate on a new full length album. The result was a dark and anger filled album influenced by what was happening all around them. The new album "Natural Selection" was completed in april and as of May 2021 is available on all major streaming services and also pysical copies available through www.cdbaby.com.

As restrictions on venues seem to be lifting the band is now putting together a small run of east coast shows to support the album. Dates will be added as they secure them.

The new material has now been written and we are now in the studio recording our full length.The itle is "Natural Selection and we are super excited for this release. The date as of right now will be Sat May 15th!

Tom's Album Reviews, Interviews, and Musical News
8 hrs ·
As far as band monikers go, Eulogy In Blood may be one of the heaviest, and most psychotic (at least in my definition of what a Eulogy in Blood may be), ones I've heard in awhile. The dark imagery of their chosen name matches up perfectly with the blunt force of their music. On March 31st, they unleashed their latest offering of heaviness, a crushing album called Human Stain.
Coming from Louisville, Kentucky, Eulogy in Blood is made up of Scott Martin on vocals, guitarist Chris Justice, Marlon Griffon on bass duties, and Jay Shepherd behind the kit. These four guys create music that will bludgeon you with down-tuned riffs, a massive rhythm section, and vocals from the depths of hell itself. Yet, they are more than that too.
The song that stuck out to me the most, and currently tied for my favorite with first track, “For Honor”, is called “Circle the Flame”. I can hear an old school Cannibal Corpse mixed with a helping of Machine Head throughout this tune. It's heavy, memorable, and that end riff is mosh pit starting material.
“For Honor” begins Human Stain with a sample from the Hellraiser film, a favorite of mine; I'd imagine this is a track that the Cenobites would torture and devour souls to, if they were so inclined. It's just heavy as fuck, and the vocals are fantastic.
“War Torn” closes out the record, with an excellent example of what this band can do. This one has a vibe, like 2000's nu-metal mixed with aspects of newer music. It's a short one, but a very cool one.
In the comments you will find a link, and it will lead you to this album. Go check it out, thank me later. Enjoy!!

Time is almost upon us! We will be releasing our new albm Human Stain in 5 days. We are super excited and we hope all of you are to!

Eulogy in Blood has just signed on Erinn Justice as Manager for all of the bands affairs. She has many years of experience and we know together we are going to have a great year!Please give her a big welcome to the family!!!

Check out the new track from the upcoming album Human Stain due out March 2019!

The new single War Torn is now up on band camp!

Check it out now!

MP3 also here to check out!