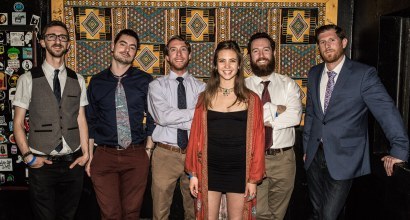 Since their inception in late 2015, Denver Colorado’s Envy Alo has been crafting their unique brand of Cookin’ Colorado Soul, complete with funky grooves, sultry vocals, and fresh songwriting. Over this period of time the group has evolved from a traditional organ-trio to a six-piece powerhouse of funk that keeps fans dancing night after night.

Ringing in 2019, Envy Alo shared the stage with legends Cut Chemist and Chali 2na of Jurassic 5 during a New Year’s Eve performance at the Pink Garter Theatre in Jackson Hole, WY. The band went on to perform at festivals including Frozen Dead Guy Days, Beanstalk Music Festival, and Westword Music Showcase. They had the honor to perform at the first ever L4LM "Funk Sessions" at Cervantes in Denver with members of Tauk, Lettuce, and The Motet, solidifying themselves as a premier act in high demand. The band is slated to release their new full-length studio album “Ship It" in Fall 2019. Recorded with Brad Smalling at Evergroove Studios, “Ship It" will give listeners a cohesive collection that will please fans of jam, funk, and soul music alike.

Envy Alo, a six-piece funk outfit based in Boulder, CO, is set to release a new full-length LP “Cruise Control” on September 14, 2018. In partnership with Denver’s Renegade Brewing Company, the band will launch a curated beer called “Envy Brut IPA” during an Album Release Party at Renegade’s Denver taproom on Friday, September 14.

Recorded live in one take at Camera Jams Studio in Arvada, CO, the 12-track “Cruise Control” is the band’s sophomore full-length album following “Live at Boulder Theater” in 2017. In the year since their last release, Envy Alo has transformed from an organ-driven trio of Aaron Pettine on keys, Kevin Hinder on guitar, and Nate Etter on drums into a powerhouse six-piece with the additions of vocalist Callie Morrocco, bassist Karl Summers, and saxophonist Kevin Supina.

“Cruise Control” fully captures the band’s live experience, ranging from extended jams like the ten-minute odyssey “Just A Fad” and the driving “Tantronius” to the concise opening single “Prom Queen” that is reminiscent of catchy modern funk acts like Vulfpeck. “Either Day” briefly takes the band into rag-tag country territory, while Morrocco’s sultry vocals shine on the R&B ballad “Tigress.” Throughout, the band shows a unique ability to collectively improvise, driven by the searing solo work of Hinder on guitar and Supina on saxophone and EWI. “Cruise Control” finds the revamped project firing on all cylinders, offering listeners a cohesive collection that will please pop, funk, or jam sensibilities alike.

“Cruise Control” will be released, along with “Envy Brut IPA,” on September 14 during an Album Release Party at Renegade Brewing Company in Denver from 6-9 pm. The Brut IPA is a collaboration between the brewery and the band that will offer drinkers a crisp, champagne-like ale with a distinct hop finish. The beer will be available for a limited time at Renegade’s Denver tap room on 9th Avenue.

Envy Alo will continue to play shows in support of “Cruise Control” through the end of the year, including a support slot for Dopapod guitarist Rob Compa’s Birthday Hang at Cervantes Masterpiece Ballroom on October 12.

Envy Alo, COJam: The Colorado Jam Scene's Featured Artist of the Month, May 2016!

We are so lucky to have been featured in COJam: The Colorado Jam Scene's website as the featured artist for the month of May 2016!

We were featured as the April Artist of the month in AboutBoulder.com!

Check out the article written by Kelsey Hahn here: http://aboutboulder.com/blog/featured-artist-envy-alo/

Boulder, CO based funk trio Envy Alo is set to release their debut EP “One Time” on Tuesday, March 22nd via iTunes, Spotify, and CDBaby. The single, “Bodzinger”, is being released on Grateful Web exclusively prior to the full EP release, CLICK HERE TO LISTEN.

We are so stoked to announce that we are going into KMGLife Studios in Boulder, CO at the end of January 2016 to begin work on our debut EP! We will be providing more details as they unfold, but we are hoping to get the tracking done that weekend, and have the EP slated to release in March or early April.

The No Name Bar

Upslope Get Down Festival, Boulder, CO

with Cycles and Tenth Mountain Division

Contact Information
Please feel free to reach out to us via the form to your right or at envyalo@gmail.com. We'd love to hear from you!