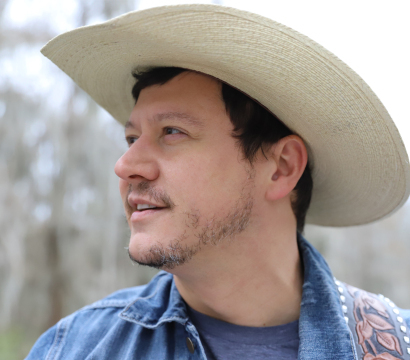 Daryl Wayne Dasher is a Tennessee based singer/songwriter who brings a fresh and organic approach to Country and Folk music. His lyrics often revolve around social consciousness, the great outdoors, personal conflict, and love. His enthusiasm for his craft is infectious and his live shows are guaranteed to leave you with a more positive attitude.

In 2019, Daryl Wayne Dasher released his third and most stylistic album to date, “Reinkarmation.” The spelling is an intentional conglomerate, as many of the songs share the common themes of reincarnation and karma. “Elvis Blues” tells the story of Elvis Presley reincarnating his way back to Graceland, just to find he couldn’t afford to pay the steep entrance and parking fees. “Love Song for Old Souls” is about a chance encounter with a lover from a past life. The album starts off with a song called “I’m in Morning”, a reflection on starting a new chapter in this life-time. The album was recorded in Nashville by the award-winning producer/artist/songwriter Thomm Jutz and boasts a roster of incredible talent. The main “band” is comprised of Dasher, Jutz, Mark Fain, Lynn Anderson, and Scotty Sanders, and includes guest performances by the Grammy Award-Winning Bluegrass fiddler Tammy Rogers (The Steeldrivers) and even an oboe solo from Nashville’s well-known Avant Garde artist/musician/composer Robbie Lynn Hunsinger. Dasher will tour starting in April in support of the new album, and also celebrating 10 years since his first album, “Long Road Now”.

In 2008 Dasher was involved in a musical movement spearheaded by Brigitte London called “Spirit of the Outlaws” in Nashville. The artists involved were recording tracks with legendary producer Jerry "Jigger" Bridges (Waylon Jennings, Paul Anka) at Bridges' studio in Golden, Mississippi for a supporting album of the same title. The doors did not open for the release of that compilation album, which featured a band of legendary musicians (Richie Albright, Jerry Bridges, Fred Newell, and Eugene Moles). For Dasher, however, this opportunity led to the release of his debut album, “Long Road Now” in April of 2009. The album featured 10 songs including 5 self-penned songs, a cover of the late Marty Robbins’ “Devil Woman”, and a Bluegrass/Gospel tune (“I Saw the Master”) he recorded with members of his family at Sweetwater Sound in Ft. Wayne, IN.

In 2010, Dasher shifted his focus toward developing his abilities as a serious writer and began co-writing with other artists/writers like Pam Belford, Brigitte London, Brook Faulk, and Jeff Keith (Tesla), whom Dasher also played in a band with called CMF. He attributes the shift to attending a house concert featuring Larry Jon Wilson and to discovering the music of Townes Van Zandt and Guy Clark. It was then he began working on the songs for his second solo album, “Great Big Sky”, which was released while on tour in Switzerland in 2013 and included his most popular song to date, “Mountains of Montana”. The album showcases 10 songs written by Dasher himself and one song called "Follow Me", written by Roger Alan Wade (previously unreleased). "Great Big Sky" was a raw, experimental album, recorded mostly on a handheld device called the Zoom H4N. Most importantly, "Great Big Sky" creates the foundation for the musical, lyrical, and artistic approach Dasher would take towards developing his own signature sound.

Dasher is a day-one member of the national roots music movement “The Last Honky Tonk Music Series,” which was started in March of 2014 in honor of the late singer/songwriter Wayne Mills. The series is comprised of artists, venues, retailers, community leaders and more scattered across the US and working together to create a new way to move forward in the music industry. Along-side their sponsors, especially D.A.T. Sauce out of Morgan City, Louisiana, they also strive to help the communities that they live in and visit while touring. They are also very active in honoring and helping our wounded veterans through their “Concerts of Light”, and working with organizations like the R&DA Military Assistance Program out of Hopewell, VA. Last Honky Tonk Music Series shows often take artists to small towns that one may never have heard of or would have thought to pass through. These small towns and unique venues, like the Hitching Post in Darrtown, OH, or the beautiful Jacoby Theater in Alton, IL, have been a large part of Dasher’s tour schedule for the last several years. Through touring the US in his hand-me-down ’92 Buick, often alone, sometimes with other artists like Outlaw Country legend Billy Don Burns, Dasher has learned to fine tune his craft to reflect his true self without the textbook molding or support of a major record label.

In 2020, Dasher was forced to cancel most of his live shows due to the COVID-19 pandemic, but found a way to keep moving forward during the quarantine. He started playing a livestream show via his Facebook page every week called “Friday Night Quarantunes” and has amassed thousands of views and many new fans because of this. The free-will donations from these shows helped to finance a new studio album, engineered by Zach Kasic at Wild Feather Recordings in Hendersonville, TN with an astounding cast of musicians (mostly recorded remotely as per safety protocols) The album includes mostly songs that he has written and co-written since the quarantine began. The album is yet untitled but is slated to be released on June 25th, 2021.

Daryl Wayne Dasher is an artist who sincerely cares about his craft and about the people who listen to it. His passion for music and for humanity sweats out of him during every single performance. In a new world where people have virtually limitless choices of music, art, and entertainment, it is important to find a way to stand out. In a statement from Outlaw Magazine.com, music critic Richard Deihn wrote that "Daryl Dasher's unique rolling baritone slides into the listener's soul and takes up residence. A dynamic, commanding and uninhibited performer, Dasher's star power lies in his ability to truly connect."

The New Album is Almost Complete!

I'm excited to say that Zach Kasic (recording engineer, co-producer) and I have almost finished recording all of the tracks for the upcoming album! I've still got to go in an do all of the vocals but we've already got the mixes almost set in stone.  The track listing is changing daily right now, but I'll fill you in on that soon!

We now have a release date set with iTunes, Spotify, Amazon, and brick & mortar record stores for June 25th, 2021!

Dasher returns to the studio to record REINKARMATION

In November, 2018, Daryl Dasher will begin tracking an album of all new original songs.  The album is currently being titled "Reinkarmation" (A play on the words karma and reincarnation), due to the fact that several of the songs unintentionally carry a karmic theme.  "Reinkarmation" will be engineered by the acclaimed Germain born and Nashville based producer/writer/guitarist/artist Thomm Jutz.  Fans will be able to pre-order the album, allong with some extra goodies via the Kickstarter campain launching soon!

With very special guests: THE BOTTOM OF THE BARREL BOYS!

Memphis, TN Kudzu's (Songwriters in the Round with Andrew Adkins and Daryl Wayne Dasher)

Last Honky Tonk Music Series: "Honor those who came before you, pave the way for those who will come after you.."

Billy Joe Shaver is Hero to all of us. It has been amazing to see all of the press he is getting with his recent album Long In The Tooth, his recent appearance on Late Show with David Letterman w/ Willie Nelson & all of the fantastic reviews. At age 75, he is still kicking' ass and stealing hearts. There are hundreds (yes, hundreds) of covers of Billy Joe Shaver songs. Waylon Jennings, Johnny Cash, Willie Nelson, Elvis Presley and Kris Kristofferson are just a handful on that list.

Beyond his brilliance, why he is so very special to us is that he still doing it. Out there living his music in the honky tonks every day. The Original Honky Tonk Hero. After all, he wrote the song, he lived it and still lives it to this day.

Some of our artists will share a set together as is traditional with Series shows. LHTMS Lone Oak Fest will be Hosted by Gordon Ames of Big G's Texas Roadshow & Sponsored by Dat Sauce. If you are interested in becoming a Vendor or sponsor of this event, please contact lhtsavc@gmail.com. Tickets will be on sale shortly at American Live Music - AmericanLiveMusic.com. Pivo's Ice House is an amazing venue run by wonderful people who truly support live music. The food is excellent, the atmosphere is one of community and friendship. The Fest will be held on the Outdoor Stage and we will have information on camping and lodging for those traveling in from out of town. Stay tuned for more details.
---
The Last Honky Tonk Music Series is an unprecedented & historic Roots Music Series taking place all across America in select venues featuring outstanding national touring artists/songwriters in the Honky Tonk, Outlaw Country, Roots Country (Ameripolitan), Bluegrass, Folk, Southern Rock, Blues, Country-Blues genres. Venues are selected by their dedication to Live Music.
The Series is named in honor of Wayne Mills. Visit WayneMillsBand.com for information on the man and his music.

RSVP for more information and to reserve seats

Info to be released soon

Songs on the Bayou / Road to 3rd Street Songwriters Festival