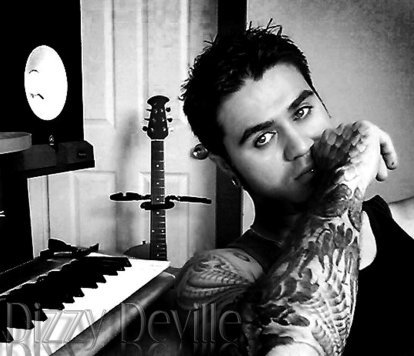 Call it "alternative acoustic reggae rock easy listening hip-hop," if you like. That's how Dizzy Deville describes it. It's an accurate description but this music must be heard to be believed. It's a personal experience every music fan owes him- or herself. Deville mingles alt-rock and acoustic melodies, reggae rhythms with hip-hopish infusions, all presented in a chilled but energy-tinged vibe that is capable of both galvanizing listeners and providing them meditative introspection. Not to mention sheer fun. The startlingly fresh sound is impressive enough as it is, but factor in the fact that Deville composes, performs, produces and records nearly all of his own music, with the occasional inclusion of a fellow artist to play or sing a part in a Deville song. Consider it an honor to be included in this artist's creative process. And embrace the blessing of getting to hear it!

Deville manages to compact such a spectrum of emotional content into one solid flow in his music, it's really quite amazing when you begin to analyze and consider all the heartfelt elements at work. Relaxation, happiness, love, pleasure, chilled-out-ness ... and more and more and more. "The beautiful thing about music to me is that it can cover or invoke any emotion," says Deville. "For me, personally, a lot of emotions were discovered through music." And now he is gloriously sharing those emotional discoveries with others via the hypnotic pull of his songs.

Music fulfills a tremendous number of roles in life, from catharsis to entertainment, from philosophical musings to interhuman connections. "Music is a tool, refuge and best friend at the same time," says Deville. "I like to think of music as a person, one I can identify with, love, hate, be pissed at or even desire. Music is something that I respect and hold very high." Such intimacy with and respect for music is reflected in the completed songs of Dizzy Deville, which offer themselves up as entities to befriend his fans, who can partake of the same sublime pleasures of music that Deville enjoys as an artist.

Despite the deceptively gentle approach of Dizzy Deville, there is a heart of darkness, a tenebrous river of shadow to be found as well. Deville doesn't eschew any aspect of the human heart, all the way from joy to despair. Even when not manifested directly, the whole spectrum of man's soul can be found – both assertively and obliquely – in the layered, textured and thoughtful work of this adept musical artist.

Deville is a man of talent and diversity. In previous bands, he has opened for a wide variety of artists from Coal Chamber to Vanilla Ice, just to name a couple. While his current focus for the sharing of his music is the St. Louis area, he is already targeting a broader range of venues in the fervent belief that his music is able to find acceptance in many places with many people. His faith is quite well placed. Deville's album "Spinning In Circles" can be purchased on iTunes, Amazon, Spotify, emusic, Rhapsody, and Napster.

"It's a rare talent that can weave together such a diverse array of styles into a tapestry of this cohesion and striking quality. Dizzy Deville is a gem, truly." - A&R Select