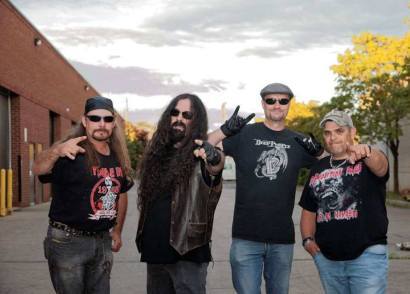 Demolition Rage started out as a recording project band a meeting of minds and creativity a wide variety of influences and styles coming together experimenting with sounds and the uniqueness of each individual player that came a added their personal feel and touch to the recording project. The Project manager so too speak is Fabio. He wanted to bring a lot of his creative ideas to life and see what kind of creation would come of it but he didn't want it to be of one singular influence from himself he wanted other musicians he has played with over the years to add their creative input and their ideas. Out of the accumulation of these creative musicians was the birth of the cd now know as Murder by numbers and NO ROOM FOR SILENCE

George (Vocals): George is from Toronto and born in Bulgaria 30 Aug 1966, play drums from 1981,become singer by default, lol, Since then dreaming to be a lead singer (get off the drums),come to Canada in 1998.

Fabio LaRocca (Guitar): Fabio is from Toronto, Ontario.
He plays a 1987 Gibson Les Paul guitar. He has played for 25 years, in such bands as “Overload”, “Night Swan”, “Tempest Rage”, “Damnation” & Heart and Stone.

Cam Cathcart (Percussion): Cam is from Downtown Toronto, Ontario
He has played for 25 years, in such bands as “The Rent Boy’s”, “Steven C and the Red Rockets” and Cadillac Bill and  Heart and Stone.

Kevin Brazolot (Bass Guitar): Kevin has an strong musical background over 25 years,
plays an extensive collection of bass guitars like his BC Rich. He has played in“Shattered Spirits”, “Altered State",  “Dirty Angels”,  Heart & Stone and currently Psychotic Authority as well.

Songs are being recorded for their new Masterpiece, in 2018.

Month of October voting is in progress for Band of the Month. VOTE VOTE VOTE

Trent Radio Interview and Spin of music from 2 albums

EVERY SUNDAY ON METAL NATION RADIO BETWEEN 10pm and 1am

5 NEW Demolition Rage Videos recorded at The Hideout in Toronto

5 NEW VIDEOS recorded at The Hideout in Toronto by

1st Place for the AllStars Bar & Grill Band on the Run event through supernova.com on May,26th 2012. We recorded a Single at Epik Productions and we Qualified for the Grand Prize.

Two albums out: Murder By Numbers & No Room For Silence

Two albums out: Murder By Numbers;  No Room For Silence

TICKETS: $15 All Access Pass from any member of follwing acts OR

The Jobbers at 7pm

Anvil show at Spot One

Meet and greet and interactive show.

Possibly one other band tba!!