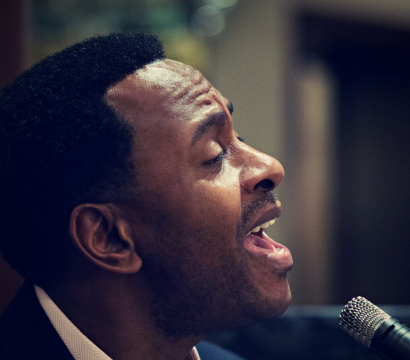 DaPaul is a songwriter, a storyteller, a listener, and a conscious life observer and introspective musical visionary. He writes with a contemporary lyrical content that reaches all listeners. He is in touch not only with his own feelings, but the feelings of others in the world around him. In each song DaPaul writes, he captures a magic that resonates with each listener in a way that is entertaining and moving.

DaPaul's roots hail back to a Christian in London where he found and nurtured his love for the piano and singing. His musical influences range from gospel, soul, jazz, and blues to pop. As a professional session musician and backing vocalist he has worked with: Eternal, Louise, MN8, Cleopatra, Alexander O'Neal, Jhelisa Anderson, Rhonda Thomas, Kloud 9, Des'ree, and Gabrielle. He has also appeared on various TV promos: Jools Holland, GMTV, National Lottery Live, VH1, TOTP, Montreaux Jazz Festival, and The World Music Awards.

'My Gift' is a grateful tribute to the good that lifts our spirits higher and further. It was the first single from his debut album 'Soulful Spirit', released in December 2012, and was just a taste of his well-recieved album released in April 2013.

As a session musician and backing vocalist for highly-acclaimed stars such as Alexander O'Neal, Des'ree, Jhelisa Anderson and Gabrielle amongst others, DaPaul has covered a diverse range - from Gospel, Soul, Blues and Jazz to Pop - carefully honing his craft over the years.

DaPaul’s album ‘Soulful Spirit’ was launched on 30th April 2013. Since the release 'Soulful Spirit' reviews have been excellent by:

Peter Young @ Jazz FM chose 'She's So Entertaining' as Track Of The Week' in July 2013 and the album ‘Soulful Spirit’ reached no.3 in the UK Soul Chart www.uksoulchart.com in Dec 2013.

DaPaul is a talented singer and songwriter from London. He began singing in church as a young man and his influences include gospel, soul, jazz and blues. Working as a session musician and backing vocalist he has worked with names such as Eternal, Alexander O’Neal and Gabrielle and has appeared on worldwide TV promos including The World Music Awards and the Montreaux Jazz Festival.

’Soulful Spirit’ is DaPaul’s debut album and includes the single ‘My Gift’ which was released in 2012.

All of the tracks on the album are skilfully crafted, and DaPaul connects with each song in a very emotive way which lets the listener know how intensely personal and meaningful each song is to him. His voice is both soothing and passionate, and each song takes you on a thought-provoking journey through the story of the lyrics.

Most of the songs are inspired by love in one form or another. ‘Fairtrade’ is a song about equality, and Red Blood Streets’ is a hopeful upbeat jazz funk vibe concerned with overcoming violence. The mellow grooves ‘Love’s Like’ and ‘Kumbaya’, and also the jazzy ‘Soulful Spirit’ are inspirational gospel tracks. The pick of the album is the spiritual composition ‘My Gift’, with its uplifting lyrics and laid back soul vibe. Each track has been carefully composed with attention paid to every aspect whether it be the gentle keys, the soft brass or a jazzy guitar riff, and DaPaul’s soulful accomplished vocals will make you feel every lyric with him.

This album will make you reflect on life, but will also soothe and inspire, with its hopeful, peaceful soul vibe. A very impressive debut album from a talented man who we will no doubt be hearing a lot more of.

© Sue McDonald 2014. Unauthorized use and/or duplication of this material without express and written permission from the author and/or owner is strictly prohibited. Excerpts and links may be used, provided that full and clear credit is given to Sue McDonald with appropriate and specific direction to the original content.

DaPaul is currently touring China after the release and success of his debut album 'Soulful Spirit' in April 2013.

'She's So Entertaining' was featured as Track Of The Week by Top DJ Peter Young on Jazz FM in July 2013. Gigs, promotion and radio interviews continued in 2013 and culminated with the success on the album reaching no.3 in the www.uksoulchart.com in Dec 2013.

DaPaul will be performing tracks for his debut album as well as soul, r&b and motown classics.