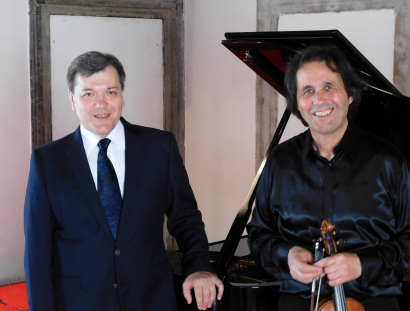 The violinist Volodja Balzalorsky and the pianist Aleksandar Serdar, both internationally acclaimed artists started to play together after meeting at Evmelia Festival in Greece in March 2015.

They successfully performed together at Festival Spectrum and Ljubljana Summer Festival in Slovenia, Festival-Incontri Musicali Cividale in Italy, The Kolarac Podium of Chamber Music in Belgrade, Serbia, Concerts ClÃƒ ssics L'Escala Empuries 2017 in Spain, and International Concert Series Autonnomusicale Cosenza 2017, Highlights of the year 2018 and the concert season 2018-19 will include Tour of Duo Balzalorsky-Serdar in Various countries in Europe.

Numerous highly praised concerts, broadcasts, CD and TV recordings in various
countries have established his reputation as an artist with a sensitive, intelligent, and
intuitive gift of interpretation, a polished technique, and a rich, full tone.

Volodja Balzalorsky is particularly active in the field of chamber music. He works
with many international groups and ensembles.

Pianist Aleksandar Serdar won several international competition awards including the
Monza, Carlo Zecchi and Vercelli in Italy, Palm Beach and Cincinnati in the USA
and the 4th prize at the Arthur Rubinstein competition in Tel Aviv.

A native of Belgrade, Serbia, Aleksandar Serdar graduated from the Art Academy of
Novi Sad and received his Master of Music degree at the Peabody Conservatory of
Music in Baltimore where he studied with Leon Fleisher for five years. Later he
continued his studies with Sergio Perticaroli at the Academy of Santa Cecilia in
Rome.

Currently, Serdar is a Professor of Piano at Academy of Arts in Belgrade and at the Music Academy of Ljubljana University.

Serdar's CD, released by EMI Classics, in 1988 arouse strong interest from promoters
and the press. His second double disc has been released in Luxembourg in December
2004. He has recently recorded a first CD for the Serbian discographic house PGP
with an all- Baroque repertoire.