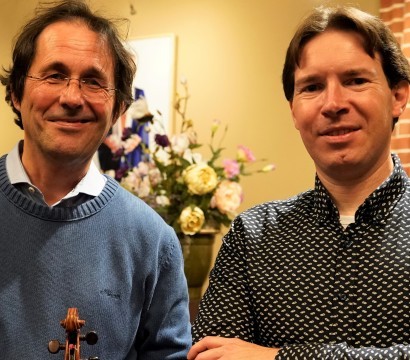 The violinist Volodja Balzalorsky and the pianist Peter Caelen started to play together in September 2017. They performed together at International Concert Series "Excellent Concerts 2017" in Eisden, Netherland, at "Alba Music Festival 2017" in Italy, at Maene Concert series in Rerkem, Belgium.

Big success was China Tour In November 2017: Duo Volodja Balzalorsky and Peter Caelen gave concerts in 13 Chinese Million Cities at prestigeous Chinese Concert Halls, such as the Beijing Concert Hall, the Concert Hall of the Shandong Grand Theater in Jinan, Hangzhou Grand Theater and others, with a program with only works by Johannes Brahms. In Reviews are mentioned Duo's superb artistic skills, their perfect chamber music cooperation, and an unforgettable presentation of the magical music world of Brahms, for which the Duo was everywhere rewarded with long-running applause by enthusiastic audience.

Volodja Balzalorsky is internationally acclaimed violinist. He is Two Time Winner of Independent Music Awards 2014 - on receiving top honors in the Live Performance EP category for Karol Szymanowski: Violin Sonata in D Minor with the pianist Hinko Haas, and Vox Pop Independent Music Award 2014 for Debussy Violin Sonata performing with the pianist Christoph Theiler.
He was also Four-Time Nominee of IMAs 2014.
Volodja Balzalorsky is recipient of several further international music awards such as The Hollywood Music in Media Award, The Inland Empire Music Award, The Ontario Independent Music Award, The Canary Island Music Award, Julij Betetto Music Award.
Numerous highly praised concerts, broadcasts, CD and TV recordings in various countries have established his reputation as an artist with a sensitive, intelligent, and intuitive gift of interpretation, a polished technique, and a rich, full tone.
After his successful performance in the international cycle Violin Virtuosos in Belgrade, the esteemed critic in former Yugoslavia, Slobodan Turlakov, defined his artistic personality with the following words: Volodja Balzalorsky is passionately devoted to violin, inspired by the flame which distinguishes the most refined and authentic violinists capable of building the dramaturgy of musical works in the most natural and persuasive manner. His interpretation calls for an exalted and compassionate listener, which is the d i s t i n c t i o n of rare and predestined musicians...(Vecernje Novosti, Belgrade).
Volodja Balzalorsky has been a guest artist at international festivals and concert series in various countries such as Italy, France, Austria, Belgium, the United Kingdom, Germany, Serbia, Slovenia, Croatia, Bosnia and Herzegovina, Macedonia, the Czech Republic, Slovakia, Turkey, Portugal, Norway, Denmark and USA.
Volodja Balzalorsky is particularly active in the field of chamber music. He works with many international groups and ensembles, and for several years has successfully performed in DUO with pianists Christoph Theiler and Hinko Haas. Critics comment on the degree to which he is able to develop and maintain unity with his musical partners in this milieu, presenting ...an exceptional harmony of ease and authenticity of performance. He is a member of renowned Amael Piano Trio (www.amaeltrio.com

Pianist Peter Caelen studied at the Conservatories of Maastricht and Amsterdam with Frans van Beveren, Joop Celis and Willem Brons. He continued his studies with Peter Feuchtwanger in London and Thomas Duis in Saarbrücken. Furthermore he has taken part in masterclasses with musicians such as Peter Donohoe, Lazar Berman, Eugen Indjic, Piotr Paleczny and Jan Michiels.
Peter Caelen played concerts throughout Europe and China at venues and series such as the Concertgebouw in Amsterdam, De Doelen in Rotterdam, Beijing Concert Hall, the Shandong Grand Theatre Concert Hall in Jinan, Holywell Music Room in Oxford, Brussels Royal Conservatory Main Hall and Concerts de Midi, the Saarbrücker Kammerkonzerte, the Rhein Mosel Halle in Koblenz and Sellosali in Espoo. Furthermore he could also be heard at festivals such as the Mozart Festival, the Klevischer Klaviersommer, the Mendelssohn-Tage, the Feuchtwanger Piano Festival, the Kamarihelmi Festival, the International Festival Summer in Old Ljubljana Town and the Alba Music Festival. As a soloist he performed with several orchestras and as a chamber musician he worked with numerous musicians such as violinists Simone Lamsma, Esther Yoo, Lisanne Soeterbroek and Hans van Kerckhoven, cellist Olsi Leka, the Carducci and Atrium String Quartets, members of the Royal Concertgebouw Orchestra and the Symphonieorchester des Bayrischen Rundfunks and the wind soloists of the Deutsche Kammerphilharmonie Bremen. Recently he toured China performing in thirteen concerts the complete works for violin and piano by Brahms with violinist Volodja Balzalorsky.
An excellent and versatile craftsman(Eindhovens Dagblad)
In 1994 Peter Caelen won a first prize in the Princess Christina Competition in Den Bosch (The Netherlands). In 2001 he was a finalist in the International Johannes Brahms Competition in Pörtschach (Austria) and in 2006 he was awarded a diploma during the World Music Competition Ibla Grand Prize in Italy. The Frits Philips Music Hall in Eindhoven presented him as ‘Zuiderlicht’ in 2005. As a promising young talented musician he was given the opportunity to compose his own concert series.
Peter Caelen was to be heard and seen on several occasions on both Dutch and foreign broadcasting networks like Radio 4 and SWR. His cd’s include works by Nordgren, Berg, Schönberg, Beethoven, Brahms, Bach, Wagner, Debussy, Prokofief, Haydn, Schubert en Liszt. Peter Caelen was invited to give masterclasses in the United Kingdom, Finland and Belgium. Besides he is a frequent jury member in competitions both in the Netherlands and abroad (a.o. Belfius Classics). Since 2006 Peter Caelen has been Director of the Excellent Concerts (formerly known as Virenze Concerts)

(Saturday, November 25, 2017) - In November, Duo Volodja Balzalorsky and Peter Caelen gave concerts in 13 Chinese Million Cities at prestigeous Chinese Concert Halls, such as the Beijing Concert Hall, the Concert Hall of the Shandong Grand Theater in Jinan, Hangzhou Grand Theater and others, with a program with only works by Johannes Brahms. In Reviews are mentioned Duo's superb artistic skills, their perfect chamber music cooperation, and an unforgettable presentation of the magical music world of Brahms, for which the Duo was everywhere rewarded with long-running applause by enthusiastic audience.

In Review are mentioned Duo's superb artistic skills, their perfect chamber music cooperation, and an unforgettable presentation of the magical music world of Brahms, for which the Duo was rewarded with long-running applause by enthusiastic audience.

(Saturday, November 04, 2017) - The violinist Volodja Balzalorsky and the pianist Peter Caelen will perform tonight tomorrow 5th of November at Beijing Concert Hall all sonatas for violin and piano by Johannes Brahms. This will be the first concert of the China Tour.