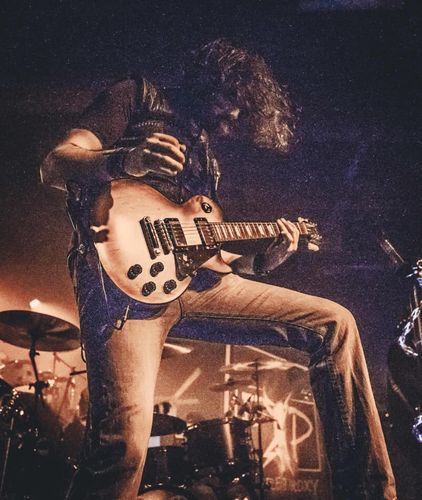 Antman started his musical career late in his teens. His older brother introduced him to Van Halen and took him to his first VH concert at the age of 17.  Blown away by Eddie’s skills and Eruption, within 2 weeks of that concert he enrolled in guitar lessons at the local music store.  A few years later he signed up for a Battle of the Bands showcase brought on by Skips Music in Sacramento. Of the 23 bands, Antman’s band Charybdis took first place. Later he was involved in several other bands in the area such as Mindset and VENT. He also has “Leftovers” (songs that did not fit in previous projects) that he compiles for his solo project The Antman Project.

With an unyielding desire to be great, he studied music in college. Learning theory, piano and the fundamentals of music. While at college he was involved in Radio and was an on-air DJ. This is where the moniker Antman came from and has stuck ever since.

As his abilities began to improve he broadened his musical influences. He became a big fan of greats like Dream Theater, Joe Satriani, Steve Vai and many more. These virtuosos shaped his style where he would incorporate much of their techniques into his only playing. Practicing nearly 6-8 hours regularly to become a great guitarist.

Learning piano and drums helped shape his overall music ability and provided great insight on how to put together musical pieces. Antman’s influences range from Yanni to In Flames to even Keith Urban (although he doesn’t play country very well).

First picked up a Schecter C7 Hellraiser and was blown away by its playability. Incredibly smooth and fast fretboard, the body is light and allows for great transitioning between tapping and picking positions. Lastly, the price was amazing. For an inexpensive guitar to play as well as it did was amazing.

you can buy direct from:  www.failurebyproxy.com to avoid service fees.

Tickets and More Information
Update Required To play the media you will need to either update your browser to a recent version or update your Flash plugin.
Download Download