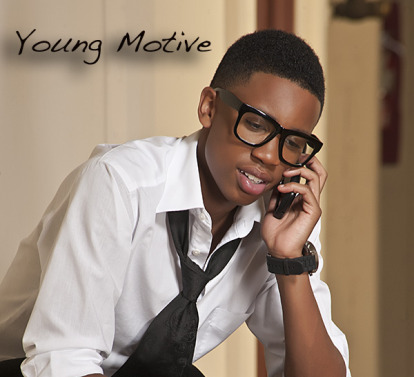 Many of today’s hip hop artists rap about blowing money on cars, clothes and alcohol while their fans can barely afford to buy their music. But  Young Motive (born Tarik Wright, Jr.), “the DMV’s finest honor roll rapper, motivational speaker in a pair of Jordan sneakers,” decided to “take a stand.” Seeing on television all of the hardship in the world, the teen decided that he would rather use his talents to not only entertain, but to educate, uplift and---as his name suggests---motivate his peers. With his “nerdy swagg,” he makes being smart cool. And through his music he encourages other young people to stay in school, make wise choices, set and reach goals, and “elevate our minds, elevate our status, elevate our life!”

Young Motive started working toward his goals at a young age. He has been performing since he was four years old and writing music since age nine. Confident in his son’s natural talent, Young Motive’s father, a local music promoter, sent an audition video of his son to Showtime at the Apollo. Three weeks later, Motive hit the stage for his first big live performance at the “It’s Showtime at the Apollo” Talent Search at the local mall, where he captivated the crowd with his style, stellar showmanship and stage presence. Ultimately, he came in second place, winning several prizes and landing three gigs from area promoters.

Learning the fundamentals of singing and acting at the SNT Talent Agency in Maryland prepared Young Motive for roles in various stage plays and helped to propel the rising star. He was featured as Martin Luther King, Jr. in the Black history production, “We Are the Choices We Make,” where during intermission he performed his first recorded song, “Die So Young.” He also had a part in “Scrooge,” where he had a leading role as Scrooge’s companion. In addition to plays, he further honed his craft competing in many talent contests, often taking the top prize. At a Motown talent showcase, he performed his favorite Motown hit, “Dancing Machine,” by the Jackson 5. He performed at the Washington, D.C. leg of the LeBron James / Nike More Than a Game Tour in 2009. He also won “Best Performance” at Baltimore Apollo, first place prize at the Millennium Talent Search in D.C. and first place in the Whaler’s Creation talent search. In December 2011, Young Motive rocked the stage on BET’s 106 & Park, performing his debut single, “Burgers & Fries” (available on itunes and other outlets). This year, 2013, Motive has performed in nearly every city, making appearances on the Scream Tour. He's opened up for countless mainstream artists, Motive is on the Applaud The Kings Tour with headlining artists, Issa & Jacquees.

Legendary pioneer of the hip-hop movement Darryl “DMC” McDaniels of Run-DMC said Young Motive “is bigger than Rap,” and acknowledged him as someone who will have a major impact on this generation of music and society as a whole. In an industry that tends to push aside artists with more uplifting messages, this young rapper, singer, actor is making his mark, proving that he has a place on the world stage and that one can have success while encouraging and motivating others to be their best.

“For the ills of society, I’m curing the pain...Young Motive, I’m hoping y’all remember the name!”

May 02, 2010 12:13 AM
P. Christine Smith
Sun Journal Staff
It’s a community celebration with a message.
Duffest 2010, the ninth such annual event, brought together community members from the Greater Duffyfield area and throughout the city of New Bern on Saturday, for a day of fun, friendship and fellowship. Crowds of men, women and children gathered at Stanley White Recreation Center/Henderson Park on Chapman Street to enjoy live entertainment, food and games.
“We’ve opened this up to the community so people can come into the heart of our community and see it’s not a bad community,” said Bernard George, project consultant.
All of the entertainment acts, vendor booths and activities fell in line with the Greater Duffyfield Residents Council’s eight community goals, including positive actions in regard to elders, youth, a clean community, homeownership, health, crime and safety, investment worthiness and community pride, George said.
“I think a lot of people look at this area in a negative light and this is a way of showing that it’s not all bad,” said Terence Danns, who came to the event with his wife Latuan and their daughters True, 4, and twins Treasure and Trinity, 2. “There’s a lot of wonderful things going on here.”
The festivities kicked off at 10 a.m. with the Holy Ghost Celebration, featuring praise songs and dance, a mime and a gospel rap group. The opening ceremony included the posting of colors, a solo performance of the national anthem, congratulatory remarks from Mayor Lee Bettis and recognitions. The ceremony rounded out with the presentation of Mr. and Mrs. Duffest 2010, the Rev. Thomas Wooten and Addie Wooten.
The Greater Duffyfield area is composed of 19 subdivisions, George said, and representatives of each area work together to make the event a success.
“This is a year-long ordeal,” said Jamara Wallace, the council’s chairman and the Duffest 2010 program coordinator. “We meet basically once or twice a month throughout the year, strategizing for the event.”
Businesses and individuals from throughout the area provide contributions to make the event possible, he said.
“All entertainment, rides … everything is free of charge, so that also helps the community,” Wallace said. “We try to keep things as affordable as possible. We also want to thank the city for its support.”
Musical performers throughout the day maintained a positive message, including 13-year-old motivational hip-hop performer Young Motive. The boy, whose name is Tarik Wright Jr., lives in Washington, D.C., but he has New Bern family roots. His great-uncle, John Robinson, is a resident’s council committee chairman.
Young Motive, who has been performing since he was 4 years old and writing music since he was 9 years old, said he got into motivational music after noticing on the television news that there is hardship in the world.
“I wanted to take a stand,” he said.
Devon Smith and Ignatious Narcisse are U.S. Marines from Cherry Point air station. They learned about the event and volunteered their time to ensure event safety and “assist with whatever else they need,” Smith said. They were glad to provide support for a worthwhile event, they said.
“We just wanted to volunteer,” Smith said. “It’s all about giving back.”
As the people enjoyed Bingo games or pony rides or barbecue plates, the underlying message of the event was all about community. Such events, George said, strengthen a community and help it succeed.
Others agree.

“In the past this area was really strong,” Danns said. “And this event is helping to bring that back.”

WHY WE EXIST, OUR CORE PURPOSE
Connect deeply with adolescents with music to influence positive identity development. Encourage passing the M.I.C. (Motivating, Inspiring and Changing Lives). Consistently deliver a message from a youth’s point of view of how to overcome, the best hope for young people come from mentorship one whom they can relate to.
Instill in all youth the recognition that their destiny relies on one’s worldview, Your perception on Your position in this world.
Arm each person with lyrical power, content and education to strengthen and renew their minds against negative influences which often result in drug and alcohol abuse, teen pregnancy, poor academic performance, low self-esteem, violence and even death.
Assist others to embrace individual power, talents, unique gifts and purpose by taking control of your destiny believing it will lead to a meaningful destination.

WE ROCK THE DISTRICT

THE "PROTECT ME" PROJECT "THE BULLYING STOPS HERE"

COMPETITION OF THE ARTS

SAVE OUR YOUTH THROUGH FASHION

"Breaking The Silence on Youth Violence"

YOUNG MOTIVE SPECIAL GUEST PERFORMANCE @ "GET YOUR PRAISE ON"

Back To School Jam