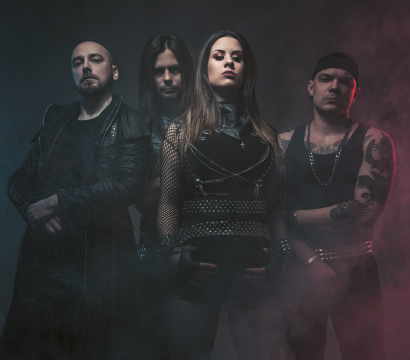 Void Inn is an alternative/heavy metal band formed in late 2010 in Los Angeles, CA by members Jelena Vujanovic (vocals) and Sinisa Pejovic (guitar), who had just completed their studies at the prestigious Musicians Institute in Hollywood.

The band's sound is powered by fierce riffs reminiscent of early Black Sabbath, mixed with odd meters, virtuoso guitar parts, a wide range of unique vocal tones and a vivid splash of colour.

Void Inn pierced the urban LA rock and metal scene of the last decade and quickly became in demand to play the legendary clubs on Sunset Strip such as the Whiskey a Go Go, Rainbow, Key Club and Viper Room, becoming well known for their energetic and ferocious performances.

Void Inn's musical identity has been described as Alice in Chains with a female Danzig on vocals, but in reality there isn't anything quite like them out there! At the end of 2011 the band moved to Belgrade were they continue to work and in addition continue to play a large number of shows across Serbia and the surrounding countries.

Void Inn have had the opportunity to be heard at various festivals including Exit Festival, Revolution Festival (Ro) , Zajecar Guitar Festival, Polinero Rock Fest and several others. The band released their first CD “I Can Hope” in April 2016 and followed this up in June 2017 with a European tour visiting 10 countries including Germany, Czech Republic, Poland, and Slovakia.

In March 2019 the band had a huge privilege to share a stage with the legendary Megadeth bass player David Ellefson in Dusseldorf, Germany, and video of this gig can be found in the appropriate section of this EPK. Void Inn is currently working on their second studio album "End this Game" which is due to be released in September 2020.

“There is no fear, only hope for Serbian heavy metal scene, the future
has arrived!”
David Vartabedijan – Serbian Rock Critic (Politikin Zabavnik)

“Great sound! These folks throw breaks and shifts in their tunes whereyou don't expect them and it works beautifully. Addictive hooks and some sweet guitar riffs. Smokin' band!”
Rick Frost

or click the social media logos at the bottom of the page to go straight there!
Information Request