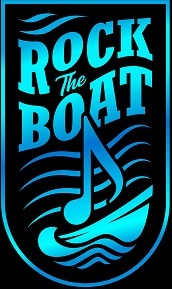 Our Story, Our Time

Under contract with RCA Records by 1972, The Hues Corporation also appears as the awesomely funky soul group performing in a nightclub scene, in the groovy horror Blaxploitation movie, “Blacula.”

In 1973, their debut single “Freedom for the Stallion” hit #63 on the Billboard charts.

In 1974, the band scored a massive smash success with “Rock the Boat”; the infectiously bubbly and upbeat tune hit #1 on the Billboard charts, sold a million copies, and remains one of the first major hit disco songs from the 70s. “Rock the Boat” is the band’s lasting legacy. The exquisite pop song is incredibly hooky and has harmonies that went on for days. It lead to a new, danceable sound that became a forerunner to the disco beats that would arise soon after.

The song is also in M&M commercials plus episodes of the television shows; The Sopranos, The West Wing, Ed, and The Simpsons.

The follow-up songs did well on the charts as well: “Rockin Soul,” “Love Corporation” and “I Caught Your Act.”

In October 2021, The Hues Corporation released its first song in a couple of decades, "Rock the Boat 4Love". The song is a collaboration with Master Gee of The Sugarhill Gang and Julian Johnson. The song will hit the charts and keep climbing because our fans love good music.

By 1978 their recording career began to stall. In 1989, The Hues Corporation came on strong with lead singer, Wendell E. Anderson, Sr., St. Clair Lee and Teresa Brown who later left the group and was replaced by Marie Elaine Woodard. They performed on various television specials, major U.S. venues and overseas. The group appeared in a 2004 PBS “My Music Series” television program. The group would take another brief hiatus.

In 2015 the group would return to the music scene now based out of Cincinnati, OH, the hometown of Anderson. They would perform at the 40th Anniversary of Dance Fever. In September 2019, The Hues Corporation along with other national artists performed a live Saturday Night Dance Fever Disco show in Sacramento, California hosted by Denny Terrio with the Urban Guerilla Orchestra (UGO) as the backing band. They would also perform at the 2019 World’s Largest Disco in Buffalo, New York with current members, Wendell E. Anderson, Sr., Jinnerva Shelery, and Deondra Means.

The group performed on the 2022 Ultimate Disco Cruise and headlined Cincinnati Ohio's 2022 Juneteenth Celebration. They ended the year with a performance at the amazing Asher Theater in Myrtle Beach, SC owned by James and Grace Stephens.

The Hues Corporation had various combinations of singers over the past fifty years including Karl Russell, Tommy Brown, Kenny James, Bruce Glover, Brenna Parker, Julian Johnson, Anthony Louis, Charles White, and Victoria Lynch. As of this writing in September 2021, the status of the original members and founder follows: Flemming Williams passed away in 1998. Bernard “St. Clair Lee” Henderson passed away in 2011. Wally Holmes passed away on September 1, 2021 in Los Angeles, California. Hubert Ann Kelley still resides in Los Angeles, California.

Visit www.nattyrecords.com to learn more about The Hues Corporation.

For all Business inquiries and to Book The Hues Corporation, please contact:

The new release,"Rock the Boat 4Love" is a collaboration between The Hues Corporation, Master Gee of The Sugarhill Gang and Julian Johnson. Sure to keep you on the dance floor.

Natty Entertainment and Media LLC is saddened by the loss of Waldo “Wally” Holmes on September 1, 2021. Wally was the co-founder of The Hues Corporation. He wrote most of the songs for The Hues Corporation including their biggest hit song, “Rock the Boat”. Click the link below to see a wonderful story about the life of Wally Holmes.

To Our loyal fans and members of the entertainment community:

The Hues Corporation, iconic #1 hit song, “Rock the Boat”, is proud to announce that they have signed with David R. Oriola Management, LLC for exclusive World Wide Representation. We trust that David will continue the proud tradition set forth by Mr. Wally Holmes, co-founder and songwriter, and welcome him to The Hues Corporation family.

For all Business inquiries and to Book The Hues Corporation, please contact:

Ain't No Stopping Us Now
All of Me (Standard)
Almost Like Being in Love (Standard)
Circles
Do You Love What You Feel
Don't Cost You Nothing
Don't Get Around Much Anymore (Standard)
Drift Away
Everything I Miss At Home
Everything Thing She Wants
Forget You
Get Down Tonight
Good Morning Heartache (Standard)
Groovy People
Happy
He Wasn't Man Enough
Heartbreak Hotel
How Sweet It Is
I Can't Go For That
I Caught Your Act*
I Heard It Through the Grapevine
I Keep Forgetting
I Love Music
I Second that Emotion
It's A Love Thang
Just the Two of Us
La Bamba
Let Me Take You There
Love Corporation*
Make that Move
Maria Maria
Mighty Love
Never Can Say Goodbye
Never Too Much
New York State of Mind
Next Time (I Fall)
Papa Was a Rolling Stone
Paradise
Part-Time Lover
Power of Love
Proud Mary
Remember the Time
Rhythm of the Night
Ride On A Rainbow
Rock Steady
Rock the Boat*
Rockin Soul*
See You Again
Stop the Love You Save
Stayin' Alive, Too Much Love, Love You Inside Out, You Should be Dancing Medley
Straighten Up and Fly Right (Standard)
Take the A Train (Standard)
Teach Me Tonight (Standard)
Turn Your Love Around
That's The Way of the World
That's What I Like
Too Hot
Tyrone
Unforgettable (Standard)
What You Won't Do For Love
Wonderful World (Standard)

* Denotes a hit song by The Hues Corporation

Join us in 2022 as we celebrate the greatest dance music ever! We can't wait to get back to the live music, light up dance floor and partying with our favorite disco fans. Sailing February 26-March 3, 2022 on the newly renovated Celebrity Summit. We look forward to a much needed vacation and live performances from the best disco stars! Book your spot now!


For all other Business inquiries and to Book The Hues Corporation, please contact: