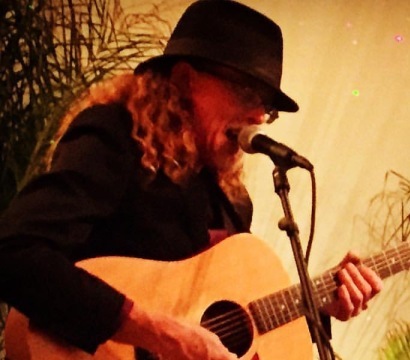 Over 3 hours of original music (ASCAP)

Original blues and covers by many artists

Reverend Stickman has appeared on over 35 full-length albums and has had his music featured in several movies, performing both solo and with original artists ranging in genre from rock, blues and jazz to Americana, beach, comedy songs and even music from around the world, such as Kirtan, Persian and Turkish as well as a little reggae.

Travelling around the country as a hired guitarist for acts such as Charlie Imes, Bviolin, Scott West Band, Christopher Dale and more, Reverend Stickman has garnered a reputation as a great guitar improvisor and uniquely talented songwriter in his own right.

In live performance - combining amazing guitar skills built over a lifetime of performance, soulful vocal work and an engaging onstage presence, Reverend Stickman is the perfect entertainer for your  coffeeshop, lounge, house concert or event!

Using his Taylor Big Baby acoustic (a gift from Taylor Guitars) and possibly the occasional electric guitar, Reverend will lay down the rhythym. Playing first soft and syrupy, then rough and dirty, you can tell he has lived the blues and paid his dues. You can hear it in his vocal delivery. The honesty and the pain come right through. And the Reverend has made some concessions to the modern age - by using a loop station and other sound effects toys to provide a live backing track, you can expect some very sweet lead guitar work at every show!

Or email us
Information Request