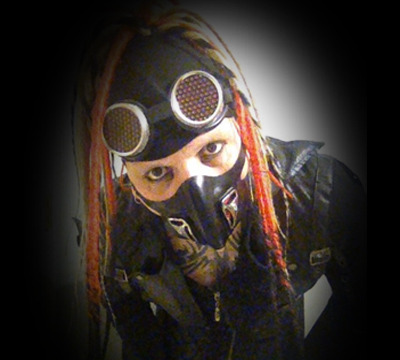 PsiVamp was born out of producing back beats for Hip Hop (SYA Entertainment) while producing traditional techno in 1999.

After a few years he was hit by Lightning and the music took a turn to a darker side. Now independent solo artist he needed a name and look for something that translated what he was trying to accomplish on stage. "...an exchange of energy from one to another...". PsiVamp was born.

With influences of Alan Parsons Project, Pink Floyd, Skinny Puppy, Combichrist, etc, its a wonder his music crosses many genres.

In 2001 PsiVamp released his first Techno CD called the Darkness Within which was geared toward mainstream techno. The music was too fast and too dark, which drew a newer target audience. Darkwave, Synthpop, and the newly developing Industrial.

In 2002 The Kindred was released and was completely dark techno.

2003 Doppelganger came out and now with the established and moving Industrial scene took to it's movement very well.

2004 brought the release of Neckrolust

2006 was the more popular, Necrogravercon. This CD placed PsiVamp on the map my combining both traditional dance with the darker aspects of the CyberGoth dance scene.

2007 Brought the Shadowlore Chronicles. A story of travels and a lighter side.

2014 Into The Sky... A more melodical approach to his old style.

2014 Asylum (Release date is set for October 31st) A more grass roots CD where PsiVamp has collaborated with others to get back to his darker sound. Definately a Halloween CD to be enjoyed for many years to come.

His live performances always incorporated live acts, elaborate stage lighting, and a bass line that would rumble the steadiest hands.

Since then PsiVamp has continued to write and produce on other projects and bands, putting live performances on the back burner.

Now, the time has come to re-invent and evolve as the dance scene is changing and coming back. After repeated requests, PsiVamp has decided to come out from behind a mixer and back to the stage with a more intence and edgy sound.

"As before I want to create a new subculture of dance that will reflect the music...", PsiVamp.

VEN PsiVamp performance
Next up was the Georgian solo dark wave musician PsiVamp. V.E.N. was honored to host PsiVamp's first Canadian performance. For those of you out there who think that all solo electronic artists performances are the same - think again. PsiVamp's stage set up was creatively put together situating him behind his equipment and banners hiding him from view, which made it very easy for the crowd to focus purely on the music. PsiVamp does not play the typical techno music - it is so much more than that. The compositions are intelligent and elegantly written. The music is soulful, dark, and moving drawing out emotions and invoking the primal nature in us all. The dance floor was filled with people who wanted to lose themselves in his music. His seven song set featured music from his latest album 'Doppelganger' and a few new pieces which are sure to be hits. Like every good artist PsiVamp interacted with the crowd giving away t-shirts and glow sticks to help illuminate their 'PsiVamp trip'. Through the music he introduced PsiVamp to the crowd and brought them into his world, took them up on a high and then slowly brought them down connecting their heartbeat to the bass beat. PsiVamp has truly left his mark on the Toronto scene and has won over many fans North of the border.

Dinner Music for Dracula
PsiVamp is the kind of artist you listen to while curling up with a good book next to the fire...the fire of Hell! Brooding, dark and delicious PsiVamp is industrial styled electronica which would fit in any Skinny Puppy fans' collection. While this is not easy listening, PsiVamp creates an aural journey which displays true talent.

PsiVamp CD Review (Doppelganger)
Arise out of the ashes of Atlanta, Georgia's cemetery comes a new Vampire Lord named PSI VAMP. His release "Doppelganger" is one slamming dark dance album. PsiVamp combines techno with Goth and soundtrack elements. The album can be played in both club genres: GOTH and RAVE. Imagine both subcultures unite together as ONE for only one night dance event. Now that would be very interesting! There are some tracks that stand out of the whole album. You get songs like "A PsiVamp Awakening", "Succubus", "Let The Nightmare Begin", this reminds me of Birmingham, Alabama based techno duo act Letrotek, "Evolution", "The Shield", a spellbound track with a twisted captivating web slinging futuristic feel, "Ordo Demonae", and "Curse Of Cain", a hard floor club track with a beat that has a military march step full of adrenaline power. Doppelganger is an extraordinary creative art form masterpiece that will please the GOTHS and the RAVERS COMMUNITY. Buy the cd and while you're at it, make sure you get a strobe light because once you pop the disc in your player; you may not want to stop dancing.

the forsaken's music
The new wave of dark techno/graven is here....PsiVamp!!!!
Not the same old techno you hear everyday stuff.Dark, eerie,and alive.Reaches inside you and your bloods starts pumping, hands begin to shake out of control, legs almost have a mind of their own, your eyes dancing wildy as you try to focus on the glow sticks spinning around. we can only hope for more from Psivamp.the music that the forsaken will crawl out of their coffin in the day time just to hear.

the shows are a most to see !!!!! No prerecorded cd that the dj just stands over the player and smiles.PsiVamp is live!!! the fingers touching the keyboards ,the lights dancing a round. take a look at your favorite dj how many face shoots do you see.A bunch because it prerecorded.go to a PsiVamp show and maybe just maybe you'll see will look up 8 to 10 time during a 1 1/2 set. way you ask because IT'S LIVE!!!!!!!!

Ron (Columbus, GA) The only Fan on record that had the PsiVamp Logo Tattoo

Thick, sweet, tight, and so challenging with sharp production
Atlanta based Psi Vamp is back with another fiery Techno Goth release. Thick, sweet, tight, and so challenging with sharp production. All 14 tracks are so powerful that's so hard and aggressive to make you get up and dance. The tracks will even go great to a sci-fi movie, tv show, even Japanese anime. The sci-fi effects coming from the synths is totally sooo cool. The styling of the synth technology waves form, forceful high energy, and the programmed drums keep things deep and moving along. A couple of tracks have an industrial feel that reminded me some of the the music I heard on some of the cartoons on Cartoon Network that comes on late at night for mature adults. "Neckrolust" is a gateway cyberspace passage that will constantly suspend you endlessly on the dancefloor. The cd is dark, tough, heavy, and intense as techno goes. The tracks are full of stellar razor fast tempo. Synthesizers and samples streamlined remarkably futuristic with brightness and
complexity. A cycling pattern just enough to enter Psi Vamp's matrix and take you on a galactic dance adventure. I was immediately hooked when I first put on the disc. And you will too after you give it a first spin. This is one brilliant excellent album! Definitely recommended to be played in bass stereo systems.

He Lurks In The Shadows
How does one describe Atlanta’s very own electronic Prince of Darkness . . ?
He lurks in the shadows, stealing heartbeats one at a time, rearranging them, subduing your mind, putting you in a trance . . . and when you awake . . . you are not the same . . . but the undead, the creature hidden from view, a graver, technophile, bloodsucking vampire channeling the magical tunes you find here on Necrogravercon, one bloody note at a time . . .

And something stirs in THE ASYLUM

Just as a phoenix rises from the ashes of its death, PsiVamp has returned with a new album "Asylum" due to hit stores on October 31st,2014. After placing his personal work of dark techno mixings on the back burner, PsiVamp has heard his fans cries and dubbed the next best thing in music that is reflected within this subculture of dance beats.

Now his spectacular return has fans elated at this newest release to hit the backstreets and the alleyways of this dark music subculture. PsiVamp has culminated a new directive in his absence and produced beats that will blow the fabric of your music theory into the abyss. These elusive techno beats bond with that of the keyboard sending the waves of music swirling around in your head and offsetting the meditative trance it places in your soul.

Reflecting his own creativity in these beats, PsiVamp releases his dual nature of both light music composure to the darker elements of sound ripping notes into our ears and mind.

We absorb these tones with the inability to keep from dancing as the collective forces of his music produces the necessary steps to stay in tune to the vibrations and flows of the notes that escape the interlocking of his composed pieces.

PsiVamp states, "DJ Lore's Remix of Ripped Apart is through the roof, Jamie's guitars complete the CD, and Anu's voice lends a mystique to the environment."

Into The Sky Anu

Just finished the last track on the CD today. PsiVamp teams up with Wylf and John Omen.

John Omen is traditionally a spoken word artists but he shows off his vocal talents in this song.

Wylf (South Carolina) has been on stage before with PsiVamp performing amazing vocal skills that have shocked audiences with her range.

Jasmine Vampette lends her astoinding vocals to the track "Lost In Translation"!

John Omen lends his voice to the song "Loneliness". The song expresses the inner folds of being alone and reflecttion.

Check out John Omen's other works. PsiVamp will be co-writing on his new CD as well.

Joining Forces For a New Sound

PsiVamp has joined forces with a broad spectrum of artists to help recreate the sound he desires.

More artists to be announced soon, as the songs are released.