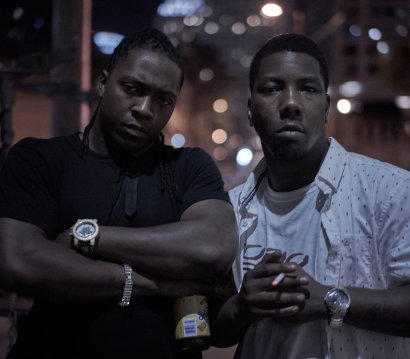 PGE!! GET RIGHT OR GET LEFT
Pushgang is made up of two young boyz in the hood who represents what their hometown is like and the experiences that they have been through. Starting with Josh AKA Jigg who was born and raised in a town called Tulsa Oklahoma where there is drugs, violence, history, and ALOT of country music. From the horses in his neighborhoods to the cowboy hats to the rodeos the country music side has always been recognized but, when it come to the hiphop scene there is NO support at all...Josh was raised on a farm half of his life and is a country boy from head to toe and has a unique southern flavor to his art.Then Jigg moved to a neighborhood called North Boston pl. where he seen everything take place From the drugs the violence etc. Jigg has even been shot back in JAN 3 2016 and even continued to do shows on the stage in his crutches "I aint gonna let nothin stop me from doin what i love to do" Jigg said. Then One day Kendrick Gray AKA KG strolled down Jiggs Neighborhood and the two became friends. Both of them could Rap So they started Going to a local open Mic night together Called the Yeti. Jigg And KG was always known to be a good team together and they made a name for themselves at the Yeti and the people wanted more so they became a group called PUSHGANG and has been making dope music together ever since. They done around 100 shows at many venues in and out of town, even at SXSW music festival in Austin Texas, and has been on the radio, played in clubs and strip clubs in and out of town. They pretty much have seen the underground side of the music industry. KG born and raised in Collins Mississippi grew up around drugs and violence etc. in a little shack with a family of 10 and he is a hurricane Katrina victim he grew up on a farm as well. KG has been a rapper all his life and started entertaining at a very young age and he always liked to do rap battles. KG moved to Newnan, Georgia where he proceeded to take on the street life and dropped out of school on his 18th birthday and decided to take his music more serious after experiening the street life for so long. 5 years later KG moved to Americus, Georgia and Everything was going fine UNTIL he started battle rapping and one day a group of individuals came to KGs mothers house and tried to battle rap him and even put up money so, KG accepts the challenge and won! he gave them a run for their money and it didnt take long at all. Words were exchanged in an angry manner and then guns were drawn. KGs art stirred up alot of anger in Georgia as a matter of fact so much anger that it one day started a riot and KG was banned from Americus, Georgia at 15 years old. So he moved to Tulsa OKlahoma to finish working on his music career. NOW WE ARE ON ALL PLATFORMS Check us out!!!! And thank you for stopping by.

Contact Information
Thank you for your support leave a message and we will get back with you THANKS!
Information Request