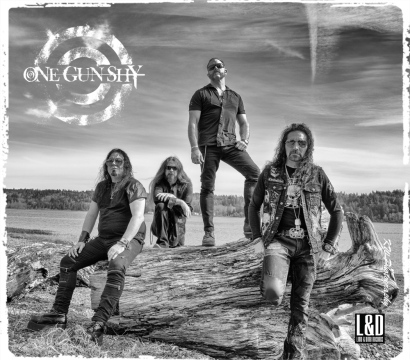 It all began back in 2011 with drive and determination to do something different on a musical note. One Gun Shy immediately started work on their debut album entitled, "After the Rain" which is out now under the Lime & Dime Records Label.
The guys work very hard in everything they do. They take the music seriously, but remember to never take themselves too seriously. The members of OGS come from varied and unique backgrounds, but share a common goal and vision for music.
OGS worked with Producer/Engineer Dylan Fant, and One Shot Studios on the production of their first release, as well as Producer/Engineer Nate Yaccino and Robert Lang Studios. Their Second Release the guys went straight to Dylan Fant with One Shot Studios. Their Third Release the guys wanted the old school production so back to Robert Langs for production and worked with Engineer Justin Armstrong. Finished At Studio Sage For The Mixing/Mastering by Tim Sage, the sound is exactly where it needed to be. The guys are always writing and working on new songs and have been spotted back at their home studio working on a new track...New Single Coming? You will just have to wait and see...
The guys were fortunate to enlist the talent of Dave Coram and Jyri Glynn for studio work on their album.
Having carved their sound around Seattle, surrounding areas and touring for the past several years thus proving that fans do enjoy what they have created and the three releases have been more than expected. The future is going to be full of surprises! Currently their third release entitled "Eye Of The Storm", released Worldwide in July of 2018 is doing extremely well! Having such singles as "Eye Of The Storm", "Constellation", "Let" and now "Hard Reality". Look for another single release sometime in June 2019. Remember to catch One Gun Shy at a Venue and on Tour Near You! Here we go AGAIN and AGAIN!!!!!!

One Gun Shy Is:

“I have to admit, I am just a sucker for a good hard rock song and One Gun Shy’s “I'll Still Know”, seems to satisfy my craving. I gave “I'll Still Know” several listens, mainly, because the song is just that good. Also, because I wanted to give each part of the song a fair analysis. Vocals are reminiscent to the likes of several of the Seattle music scene’s greatest male vocalists. When I tried to put my finger on who he reminded me of, I couldn’t come up with a specific name. I realized, that’s because the vocals are his own. There is no mimicking of other singers, he’s just built for this genre of music. They exercised professional control over the vocals, never letting them get away from the rest of the band’s playing. Cohesive, with a clear understanding of what it means to stay within the correct pitch range. Just the right amount of power, never over doing it, or drowning out anyone else...” Kim Pedone - Little Queen Music Review

“One Gun Shy, is definitely primed to make a run in this crazy industry we call music!!! Their music demanded my attention from the very first verse in "Turned a Blind Eye"!!! Their music and recording is top notch, and the vocals are extremely catchy!!! I will be playing their songs on my radio show from here on out! Definitely a must listen!!! ” Eric Crawley - The Crawley Show on Babylonfm.com

“One Gun Shy” is up to big things. The band, which was highlighted in an earlier article, has started recording their debut album at Robert Lang Studios in Seattle. Thirteen songs will end up on the finished album which will be for sale on iTunes, In Stores, at their live shows and on the “One Gun Shy” website. A completion date for the album is slated for early spring of 2013 keep your ears and eyes open." “loves crunchy, gritty hard rock.” That love is what drives the types of songs he writes and performs with his fellow band members. These four men make comprise the cleverly named band, “One Gun Shy.” The term is a guitar reference- it means that one guitar is missing from the ensemble. In the early stages of the band formation, the guys wanted another guitar player. They kept placing ads on Craigslist, but to no avail. So they were, as it seemed “one gun shy” and the name stuck. The guys are anxiously awaiting their debut! A bit of info; Robert Lang Studios is a Seattle-based studio that has produced records with Nirvana, the Foo Fighters, Death Cab for Cutie, Alice in Chains and many other well-known bands and musicians. The work of the studio can be reflected in their awards. ” Julia Hodges - The Husky Herald - The University of Washington - Bothell Newspaper

“I was quite surprised to learn this was the first public performance of One Gun Shy. This seemed to be a well oiled group of seasoned pros. This unit has really done their wood shed homework fine tuning some very well crafted arrangements. Music is heavy hitting as well as melodic. Tunes are radio friendly heavier influenced rock with slight resemblances of Daughtry or Saliva. This can certainly be credited to songwriter and frontmans baritone crooning with the ability to also cover high range belting aggression. I am definitely sure One Gun Shy is about to make their mark on the history of music that has forged the Seattle scene. ” Keith Henry, Engineer/Producer - Nytola Music, ASCAP

Review "These guys are attempting to climb a very tall ladder with some broken rungs. The music that they love to make has been popular in these parts for a very long time, and that doesn't seem to bother them one bit. They are creating something that moves them with hopes that it will move you as well. They will sneak as many ripping guitar solos into a song as they possibly can, sacrificing "radio friendly" for the chance to bring the rock just a little longer. They're doing it because they love it and that is where the true soul of music lies…" — Dylan Fant, One Shot Studios

“”After the Rain” is the first release from Seattle band “One Gun Shy”. Their sound is inspired by hard rock heavyweights such as Shinedown, Godsmack, Alter Bridge, Daughtry, and many more. It was engineered by Nate Yaccino (Soundgarden) and Dylan Fant in Robert Lang Studios (Nirvana, Foo Fighters, Death Cab for Cutie, and Alice in Chains) and One Shot Studios. These men come from diverse musical backgrounds, and through their experiences and tastes create unique blend of rock that will satisfy almost any music lovers palate. One Gun Shy will be spending the 2013 year playing shows to promote After the Rain, and hope to expand their geographic and demographic listening base. You can catch them in a city near you on tour this summer! Look for great things to come in 2013!”
Glenn - Northwest Music Scene

“One Gun Shy After the Rain Listen to One Gun Shy If you've got an itch for some straight-up 80s-style hard rock, One Gun Shy may be just the thing to scratch your itch! After The Rain, the debut album from this Seattle-based foursome impresses on a number of technical levels. They deliver a great all-around rock album despite having only been together for a couple years. The amount of polish they show in both their production and their work as a group is excellent. The Vocalist's deep voice immediately grabs the listener, low and intense but always melodic. He displays a good range as well, moving up and down while never getting out of the tenor range. Bassist Steven Gough provides solid bass licks. On their best tracks, One Gun Shy builds sparse postrock-influenced soundscapes accompanied by some surprisingly trippy drumming from Chris Womble, such as on Turn A Blind Eye As with the best hard rock acts, there's real musicianship behind it!”
Eric Jones - Round Magazine

One Nation Under Ink/Tattoo and Music Conference Festival

One Nation Under Ink/Tattoo and Music Conference Festival