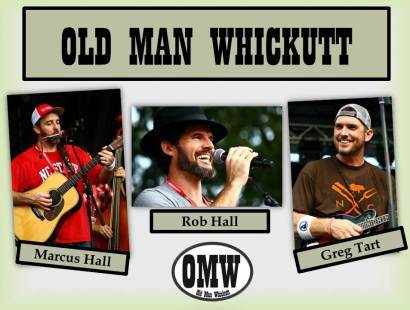 OMW is excited to announce that our bluegrass version of "ICE ICE BABY" is featured on the new DIY Network TV Show "Vanilla Ice Goes Amish"!!!

We couldn't be more stoked about rocking with VANILLA ICE!!!

Get your copy of the song on iTunes, and thaks for the support.

These words were first uttered in 1975, by a crotchety old man that went by the name “Whickutt”. The main character in a children’s storybook written by Mary Calhoun, Old Man Whickutt taught a story of being an individual and not becoming overly concerned with the opinions of onlookers. 1975 also breathed life into the first of a musical duo of brothers that would one day take the advice of the old man, and do it their own way.

Brothers born in Greenville, NC and raised in Raleigh, NC, Marcus and Rob Hall were raised in a household full of song. Their mother’s side of the family was rooted in Western North Carolina, and old folk songs and mountain music were enthusiastically sung around the campfire during their annual retreat to Toe Valley in Celo, NC. Mother Kate played ukulele as a youth, and the underrated autoharp later in life. The boys loved singing with their mom, as sing-a-long tunes filled the air on long road trips in the family station wagon. Their church in Raleigh, Hayes Barton Baptist, also played a large role in their musical development. Marcus and Rob were members of the youth choir, took part in seasonal musical productions, and always looked forward to singing with their high-energy, autoharp playing youth minister Ben Vogler.

The brothers went their separate ways following high school, Marcus staying in Raleigh to attend NC State University and Rob heading to Greenville to attend ECU. The college years proved to be an opportunity to grow musically, as both boys individually learned from friends and roommates with musical talent. It was not until a fateful year abroad in Scotland that Marcus first picked up a guitar. A friend in Edinburgh took Marcus under his wing and walked him through some basic chord structures, and the hook was lodged. Marcus returned to college the following year, signing up for classical guitar classes and filling a singing void by joining a Men’s Vocal Club. Rob had begun his own instrumental interest, soaking up knowledge from close friend and Chatham County Line stringed instrument virtuoso John Teer. Marcus and Rob were on a like timeline, miles apart.

Their individual musical paths collided in 1998, as the Hall family embarked on a 45 day cross country road trip. It was this journey that opened the door for the boys to fuse their musical passions, and the two-man band

OLD MAN WHICKUTT first took form. Their range of musical influences too varied to list, would include Johnny Cash, NWA, Pearl Jam, John Hartford and Frank Boggs as a mere sampling. Music that was passionate and true, heard in the vocals and instrumentation of their favorite artists, could best describe their taste in music. Over the next 10 years, OMW’s own musical style would emerge. A fusion of bluegrass, folk and American roots music, the brothers harmonize their homespun lyrics on tunes that range from soft ballads to loud, hard-driving foot stompers. Their songs intend to provoke thought, laced with the honesty of true human feeling. Falling back on personal experience and constant self-examination, the brothers don’t hold back when telling their tale.

Brother from another mother, Greg Tart, joined the OLD MAN WHICKUTT  band late in 2007. Best buds since high school in Raleigh, Greg & Marcus started playing guitars together while living in Atlanta, GA. Late night apartment parties & open mics at local pubs & restaurants were a regular occurrence. Who knew that in time, the “Stoned Goats” of Atlanta would re-connect back in their hometown of Raleigh, NC to expand the journey of OMW.

OLD MAN WHICKUTT. The boys know they’re “derned if they don’t” tell the story the way they feel it should be told. So the next time you hear that

OMW is playing on a stage near you, don’t forget:

Get your ticket to OLD MAN WHICKUTT!

We love the title to N&O's article..."Raleigh's Old Man Whickutt Is Cold As Ice"!!!

Thanks to the N&O for the write up. Click link to see article: N&O OMW ARTICLE

Thanks to Charlotte's WCNC for give OMW some airtime about our song ICE ICE BABY being on Vanilla Ice Goes Amish's show.  Check out the link on WCNC's website:  WCNC OMW ARTICLE

Check out the link below to Triangle Business Journal for OMW's article on ICE ICE BABY!!!

Our cover song ICE ICE BABY will be featured as the theme song for Vanilla Ice Goes Amish set to premiere on DIY Network on OCT 12th, 2013 @ 10pm.

OMW gets SHOUT OUT from National Association of Home Builders (NAHB)

Super stoke for NAHB to wish us well.

Check out link & scroll down to "Now For Something Completely Different"

OMW is excited to announce that our bluegrass version of "ICE, ICE, BABY" is going to be featured on the new DIY Network TV Show "Vanilla Ice Goes Amish"!!!

We couldn't be more stoked about rocking with VANILLA ICE!!!

Please help us spread the word by sharing with all your friends. The show is going to be AWESOME!!!

Thanks in advance and thank you so much for your support!!!

We have been invited to join the Cosmic Cowboy (Andrew Loyd) on 88.1 FM WKNC (Raleigh, NC) on his Sunday morning show...The Church of Bluegrass and the Truer Sounds.  The show will be on Sunday June 10 @ 9am.

We couldn't be more thrilled & honored.

Come join after our radio spot for a jam session outside of the studio on Harris Field.

We'd love to see you there!

OLD MAN WHICKUTT is excited to get back in the studio & continue our journey to record more tunes!!!

I Won't Drive No Minivan will be immortalized today.

We are thrilled to be recording with Jerry Brown & Andrew Marlin at the Rubber Room Studio.

Jerry has recorded many great artist including the likes of Doc Watson, Jack Lawrence, Mike Auldridge, Moondi Klein, T. Michael Coleman, Jimmy Gaudreau and an array of other stars.

Andrew is one half of the incredible duo MANDOLIN ORANGE.

We hope to nail I Won't Drive No Minivan & get it up on the website and Itunes shortly after recording.

GET READY FOR OMW TO WHICKUTTIZE SHAKORI HILLS FROM THURS. - SUNDAY!

GUARANTEED TO BE A BLAST!!!

OMW Releases WHEN JESUS COMES BACK on iTunes!

Raleigh, NC -- The band Old Man Whickutt is made up of diehard NC State fans who take a playful swipe at UNC Chapel Hill with their song “When Jesus Comes Back.” With more than 42,000 views on YouTube, the song has captured the attention of NC State friends who have invited the band to help the University celebrate their 125th birthday on April 2 at Reynolds Coliseum.

The band, comprised of Marcus Hall, Rob Hall, Greg Tart and Craig Thompson, continues to revel in the interest their song is receiving. Thrilled that their tongue-in-cheek point of view on the State/Carolina rivalry is such an unexpected hit on YouTube, the band now plans to offer the single for sale beginning April 2 on CDBaby and iTunes and will donate a portion of the proceeds to The V Foundation, in honor of legendary NC State basketball coach Jim Valvano. The song will cost .83¢, in tribute to the 1983 NC State National Championship Basketball Team.

"The way this thing has taken off is proof that amazing things can happen when you stay true to yourself and your values. We're singing about two things we undeniably love, and at the same time making people laugh. The response from both sides (NC State and UNC) has been the most entertaining part of the whole thing. As long as people know we're laughing with them, we're satisfied to no end," says Marcus. "And we start to shake just thinking about playing in Reynolds Coliseum!"

For a copy of the song, song lyrics, interview or performance requests, please contact Greg Tart at gregtart1@gmail.com.

"WHEN JESUS COMES BACK"

OMW WILL BE CELEBRATING MARCUS' BDAY BY RECORDING

"WHEN JESUS COMES BACK" FOR WOLFPACK NATION!

WE'LL HAVE THIS AVAILABLE FOR PURCHASE SOON!!!

OMW is excited to officially submit our "GOODS" to The Shakori Hills Grassroots 2012 Spring Festival.

Soooooo....our hope is to earn a spot to actually play the festival this year during the weekend.

WE LOVE THE SHAKORI HILLS FESTIVAL!!!

If you haven't been...you are missing out.

OMW is stoked about playing 2011 Pirate Fest!  Look forward to seeing everyone there.

YEAH BABY!!!  OMW is ready to rock the Southland Ballroom with Old Habits.

Come out & shake a leg with us.

Well...we don't have a slot for a stage, but we are going to make our own stage all over the festival & hopefully pull out a "W" at the Grassroots Band Competition.

Come & Join us all weekend on our journey!!!

We are excited about kicking of ECU's HOMECOMING Weekend with Freeboot Friday.  Join us as we sing our new song "264" & a special treat for Coach Ruffin McNeil!!!  AAAARRRRGGGGGHHHHH!!!!

OMW is proud to join Old Habits for their annual Christmas Mayham Show.  Come out & stomp your feet with us!

Therefore...OLD MAN WHICKUTT will be playing outside the Bi-LO Center and all along the streets of Downtown Greenville throughout the day.

We welcome all hobo's & hotel-less travelers!!!

OMW Ain't Nuttin to F with!

OMW is STOKED to be performing at the LINCOLN THEATRE on Friday night FEB. 3 with our good friends OLD HABITS & our new friends BLUE DOGS!

This is a great step for OLD MAN WHICKUTT and we hope everyone will come out & jam with us.

LOOKING FORWARD TO SEEING EVERYONE AT THE SHOW!!!

OMW IS EXCITED TO BE JAMMING AT THE NC STATE 125 YR. B-DAY BASH!

COME CELEBRATE WITH US.

COME JOIN US FOR A WONDERFUL SUMMER SUNDAY BY THE WATER.

OOOOOoooooooo.....Can't tell you who yet...but we are going to opening for an INCREADIBLE BAND THIS NIGHT!!!

We are honored they asked us.

OMW is excited to be back at SWANFEST 2013 to rock it with our friends in Swansboro, NC.  Look foward to seeing everyone at the show!!!

We are so excited to be joing Charlotte Today's crew to jam our cover song "Ice Ice Baby" on their morning show this Friday at 11am.  Going to be a blast!!!

We can't wait to rock it back in our hometown of RALEIGH, NC!

Pretty special to be invited to jam & help raise funds for the The Diabetes Bus Initiative.

Come on out & show your support WHICKUTT STYLE!!!

OMW is STOKED about opening for OLD HABITS for their annual Christmas Show!!!

Guaranteed to be a THROW-DOWN!!!

We are ready to Rock for WOLFPACK NATION at the 2014 Wolfpack Club Coaches Caravan.

The Wolfpack Nation will be HOWLING as we open for Scotty McCreerry on Hillsborough St. by the NCSU Belltower.

Gonna be some GREAT TIMES kicking off the 2014 IBMA on Hillsborough St. here in good ole' Raleigh, NC!!!  Tell everyone about it, and bring the kids!!!

Honored to be opening again for OLD HABITS for their annual Christmas Bash.

Contact Information
OLD MAN WHICKUTT would love to hear from you!

Shoot us your email to join our email list!!!