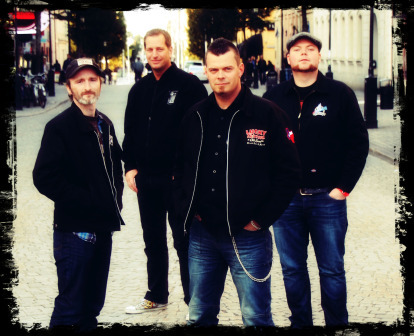 A mix between Texas honky tonk and kick ass country is the perfect description of Morten Vestly and his band. Morten has a rich traditional country sound with a southern rock edge. He sings and writes music about everyday experiences, bringing to life emotions we can all relate to.

Born in 1974 in Kodal, a small community north of Sandefjord, Norway, Morten got his first guitar at the age of 13. In his teens he played rhythm-guitar in various rock and metal bands. It wasn’t until Morten discovered his father’s collection of old country and western records that he fell in love with country music.

- It was the guys in the Highwaymen that made me want to play country music, says Morten. Beside The Highwaymen, Merle Haggard, George Jones, Travis Tritt, Marty Stuart and Dwight Yoakam, have all influenced me one way or another and are evident in my music.

In March 2001 Morten left Norway and went to the Live Music Capital of the World; Austin, Texas, to record his first solo album named “Hometown Heroes”. It was recorded in 2001 at Hit Shack Studio with a lot of great musicians like Earl Poole Ball (Flying Burrito Brothers, Johnny Cash), Rich Brotherton (Robert Earl Keen), Marty Muse (The Derailers) and Ted Roddy just to mention a few.

“Hometown Heroes” has four songs written by Morten including his personal favorite, “8 Second Hero”, a song about being the son of professional bullrider.

In the fall of 2008 Morten again had his eyes on USA, but this time California and Burbank LA. With 14 self-penned songs he recorded his second album called “Good Thing Going” witch was released in 2009.
Morten was once again involved with great people and talented musicians like Mike Turner, Dave Raven, Marty Grebb, Dennis Kaplinger and Taras Prodaniuk.

These days Morten travels wherever the music takes him with his band: Morten Vestly Band which is Rune Simonsen on bass/vocal , “Jack” Daniel Gullien on guitar/vocal, Halvor Halvorsen on drums & occasionally Tore Blesterud on Steelguitar, Dobro and Weissborn.

This last weekend MVB has been in Oslo shooting a video to one of the new songs for the new album we`re recording. It will be released early this summer.

Today on the 10`th of march we`re finally back in studio to start recording my new album. A lot of songs have been written since the last cd so it`s about time to get them recorded. Songs and news about the new cd will be relesed here during the recording sessions. We`re very exited about this cd so follow us along the way.

Morten Vestly and his band are now open for booking in 2012. You will find the necessary information under the menu "Contact".

Contact Information
If you have any comments, something to ask us about or any other inquerys, drop us a few lines and we`ll get back to you as soon as possible.
Information Request