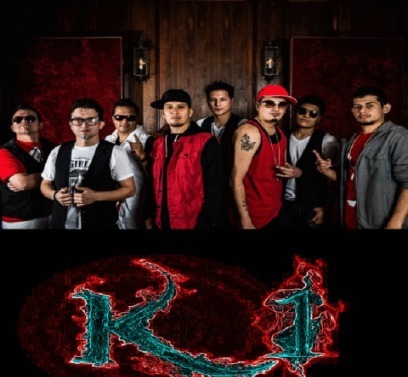 Kingz One (K1) is the name for a group of passionate, talented performers whose style is a mix of Latin Pop, Cumbia, Reggaeton, and other sounds. The group is led by Alex Ramirez and his brother Roy Ramirez, known to fans as Slim. Their careers began in La Sombra, an influential Tejano group out of Illinois, led by their uncle Tony Guerrero. Slim credits his uncles Tony and Gavino Guerrero as two of his biggest musical influences. Alex emphasizes, “we must not forget our family of musical influences, including our mother Maria Luisa G. Ramirez and all of our cousins and relatives.”
Their careers really began to thrive when they became founding members of the immensely popular and multi-platinum selling group Los Kumbia Kings. They received multiple accolades while part of that group, including: three Billboard Awards, ten Tejano Music Awards, two Furia Musical Awards and four Grammy nominations, one of which was for the debut CD Amor, Familia, y Respeto in 1999. After the release of the fourth album, Alex and Slim made the decision to part ways with the group amid controversy, due to “internal dissention.” K1 refers to their ultimately unbearable situation within the group in their song, Amor, Familia, Respect, which features recording artist Fat Joe.
Choosing to focus on their music instead of the negativity, they took some other members with them and regrouped as K1, where they began promoting themselves around Texas, California, Mexico City and other areas. Nuestro Turno is the name of their debut CD, which was released February 10th, 2004 to critical acclaim. The first single, A Que Te Pongo (I Bet I’ll Make You), became an international hit. It was nominated for ‘Song of the Year’ at the Tejano Music Awards in 2005 and was remixed by reggaeton artists Daddy Yankee and Luny Tunes. Other nominations followed and they won the award for ‘Most Promising Band of the Year’. Other popular tracks from this album include Tu, Por Ella, and Ay Amor. Media outlets such as the Dallas Morning News and Laredo Morning Times praised the group as talented musicians who are more than just former Kumbia Kings, even referring to them as “the new Kingz on the block.”
During a seven-year hiatus, they spent time assisting their cousin Cruz Martinez with his group Los Super Reyes. Their time with LSR included tour dates in Mexico and nominations for multiple awards. Slim Ramirez also collaborated with international recording artist Alicia Villarreal. K1 have returned with the CD Resurrecciòn, released December 13, 2011 and supported by the lead single Mañana . The mix of styles and flavors on this CD includes touches of bachata, reggaeton, hip hop and latin pop, all mixed with cumbia. One notable track, Si Me Quieres Tu, is a remake of the La Sombra hit. The song features friend and former Kumbia King Frankie J, as well as Don Trilo of Trilogy Mafia. K1 also collaborated with the girls of La Conquista for the track Con La Musica. The latest K1 release, Dame, features another ex-Kumbia King, DJ Kane. Mañana and Dame have had a great audience response and frequent airplay nationwide, in Mexico and overseas. With the release of this CD, K1-now comprised of Alex and Slim Ramirez, Marko MC, Sergio Lozano, Alfonso ‘Nox’ Herrera, Matt Lopez, Frank Lozano, Michael 'Mikey G' Gonzalez, Luis Mendoza, Aleks Villanueva and Eduardo Salinas-are ready to embrace the promising future that awaits them. They eagerly anticipate bringing their unique sound to fans with the K1 tour 2013! Birdcall!