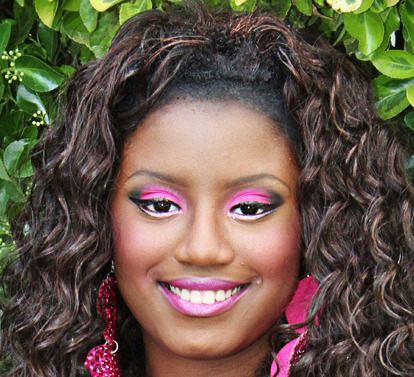 Talented 14 year old fashion designer, Jazmin Brown and her designs have been lighting up the runways in New Jersey, New York, Pennsylvania, California and more!

In January 2010, Jazmin’s made her first television appearance on the “Tyra Banks Show”.  Jazmin was featured as an “A” student and noted for her achievements in the modeling and pageant world.

Continuing on in 2010, Jazmin launched her new ready-to-wear clothing line Deztani’ for all ages.  Styles including children to adults.  Deztani’ is known for making all types of dresses, menswear and gowns for any occasion.

In 2011 Jazmin Brown, the youngest designer ate New Jersey Fashion Week blew people away as she shared her designer line.

This summer in 2012, Jazmin had the honor of designing three dresses for a Grahamfuls commercial for Kraft Foods.  Commercial is currently airing nationally on Cartoon Network, MTV, Nick Jr., Nick @ Nite, Disney and a variety of networks.

Vicissitude Magazine featured Jazmin and her 2012 collection on 4 of their special addition four year anniversary covers this past summer which also included a spread in each of her latest styles! For more a copy and information please log on to:

Jazmin has designed for reality star, Tracy DiMarco and her designs have also been worn by stars David Bovain from "The Hunger Games", Jackie Bianchi from Style Networks - Jerseylicious, Project Runway model, author, fashion event producer, Lea Rannells Comrie, former Miss Teen America, Katarina Kneer, model and founder of Angels Without Wings- Battling Bullying, Valerie Lynn Krsulic and more. There are are no limits to what Jazmin can do!

Jazmin is driven to never stop learning and has taken classes on weekends at FIT and will continue to learn and broaden her mind. Accomplished in sketching, designing, sewing and continuing to learn all the aspects of the fashion business world, Jazmin is certainly a force to be reckoned with!

Jazmin is a modest teenager, “A” student and enjoys sketching, designing, sewing, modeling, dancing, cheerleading, and playing basketball. She enjoys being fourteen and all this age has to offer, but also has her future goals set and is determined to be a top designer! She also enjoys listening to her favorite singers, Keri Hilson, Beyonce, and Ciara.

Jazmin looks forward to a prosperous career in fashion designing and her education.

Jazmin's designs will be sold in boutiques in NJ, NY and Pa in 2013.

Bergen-Passaic, NJ (1888PressRelease) April 15, 2010 - Tween model Jazmin Brown from Elmwood Park, NJ will make a guest appearance on The Tyra Banks Show, Thursday April 22nd, 2010 airing locally on WPIX-WB11 at 4:00 p.m. As a professional model, Jazmin is definitely no stranger to the pampered lifestyle and was one of several young people selected for a special kids & parents episode which examines the positive and negative effects of excessive grooming and pampering can have on children.

During the show, host Tyra Banks posed a variety questions to the panel of kids, parents and kid spa owners about the significance of exposing young girls to an adult experience.. "I love going to the salon for my manicures and pedicures with my Mom. It makes me feel good and so pretty", says Brown.

With dreams of one day working in high fashion as a model and designer, her debut on The Tyra Banks Show is a manifestation of her dreams coming true. Jazmin says, "Being on Tyra's show was natural and fun". Jazmin keeps grounded by doing everyday 12 year old activities like reading, playing volleyball & basketball and enjoying her siblings. She hopes to one day live in Miami because she loves the beach and swimming.

About Model Jazmin Brown
Jazmin Brown is a tween fashion model from New Jersey and an A-student. Winning her first pageant at the age of 7 years old, she has competed & participated in fashion shows since she could barely walk. Brown has modeled with JuJu models & won her first runway competition with Images Production Team.

RUNWAY PASSPORT: I UNDERSTAND YOU ARE THE YOUNGEST DESIGNER AT NJFW? HOW OLD ARE YOU?
JAZMIN BROWN: I am 13 years old

RP: WHAT MADE YOU DECIDE TO START DESIGNING SO YOUNG?
JB: I decided to start designing so young because I have been modeling since I was 7 so I enjoyed looking at all the beautiful clothes and I knew I could do it also.

RP: WHAT IS THE INSPIRATION BEHIND YOUR COLLECTION?
JB: My inspiration is to make a clothing line for young girls like myself. Every young lady loves to look beautiful.

RP: WHERE DO YOU GET MOST OF YOUR INSPIRATION?
JB:  I get my inspiration from my dreams when I’m asleep.

RP: WHO DO YOU DESIGN FOR?
JB:  So far I’ve just been designing for family and friends. But my goals are to open up a boutique in the near future.

RP: HOW DID YOU GET INVOLVED WITH NJFW?
JB:  I got involved with NJFW through news12 hosted by Della Crews. I went on njspotlight and showed a few things that I made.

RP: ANY ADVICE TO TEENAGERS WHO WANT TO START PURSUING A CAREER YOUNG? HOW DO YOU BALANCE IT WITH SCHOOL? and HOW DO YOU GET PEOPLE TO TAKE YOU SERIOUSLY?
JB:  What I would say to a teen is to follow their dreams. Don’t give up with whatever you wanna do. Stay focused in school too. You have to definitely have time management with sewing and school. I sew certain days..about twice a week..and school definitely has to come first. People do take me seriously. I think it’s because I try to really take my time and work hard with everything that I make. I take my line seriously!

RP: ANY DESIGNERS YOU ADMIRE THE MOST?
JB: I admire my own designer. J’ameil Dixon from Newark NJ. He has helped me so much and has inspired me.

RP: I SEE YOU ORIGINALLY USED TO MODEL? ARE YOU STILL?
JB:  I still love to model and still want to pursue that career also.

RP: WHAT IS THE DIFFERENCE IN EXPERIENCE OF MODELING AND DESIGNING? HOW DOES YOUR EXPERIENCE IN MODELING HELP YOUR DESIGNING?
JB: My experience in modeling really helps me with designing because I’m able to see behind the scenes at a show when modeling. I’m able to meet other designers and learn from them also.

RP:  DO YOU THINK THIS IS A CAREER YOU WOULD WANT TO PURSUE FOR LIFE AND WHAT YOU WOULD WANT TO STUDY IN COLLEGE?
JB: This is definitely something I want to do for the rest of my life. I have been wanting to be a designer since I was 7 years old. Hopefully I can open up an boutique. And I want to go to college for this after I’m done with high school.
Posted 1 year ago and has 0 notes
#jazmin brown #njfw #new jersey fashion week #deztani #pre-teen #teenager #usa #n america

She’s astounded all of us and left us wondering more; from runway modeling to fashion designing, Jazmin Brown has wowed the fashion industry time and time again with her impressive achievements. On the mogul of international success, Brown’s beginnings in the industry can be traced back to her early attempts at sewing and sketching; though she lacked experience, she restored her deficit with passion, ambition, and motivation. What can be seen in Jazmin that can’t be seen in other designers is more than the aforementioned –but a number. At the young age of seven, Jazmin Brown began runway modeling. She’s blown away audiences with her supermodel strut and captivated fans with her stunning looks. From day one she’s impressed us, but she went on to accomplish even more. Having walked in hundreds of fashion shows, she decided to take her career to an entirely new level –fashion design. Jazmin has always found inspiration from bright colors and flowery patterns, which are the motifs for her designs. With each design she not only hopes to add a sense of chic to the everyday girl, but also self-confidence. When asked what it’s like to see her designs on the streets, Brown responded, “I melt.”

It was her impressive resume and character that landed her an interview on the Tyra Banks Show and the opportunity to show her line, Deztani, on News12 with Della Crews. Since then, Jazmin has shown her line at New Jersey Fashion Week 2011 which she notes as being one of the most honorable experiences of her life. Currently, Jazmin is working on starting her own non-profit organization that would benefit tween and teenage empowerment.

Jazmin Brown serves as more than a young designer in the industry, but as a monument and beacon of hope for every other girl with similar dreams. Stemming from her own confidence in both her line and in herself, she truly embodies what it means to chase your dreams; she just happened to catch them at seven years old.

Check out our interview with Jazmin Brown!

J.B.: I have always known I wanted to become a designer.  However, after I lost a pageant because of two points, I decided to take my career to the next level.

Who are your fashion idols?

I love Vera Wang gowns.  I am into red carpet looks.

What is your inspiration for your brand?

I have done pageants and runway competitions most of my life so, I love to dress classy.  I love evening dresses, and some couture fashions.  I just like to be different also.

How has your family served as an inspiration for your brand?

My family has inspired me in my brand because they are there with me every step of the way.  If I have a problem with something as per fabric, they will make sure they help me find it.

If you were to describe your brand in three words, what would they be?

Describing my brand in three words:  fun, classy, and versatile (can be worn for different purposes).

Jazmin is also a proud supporter and sponsor to "Kids' Confidence - My Style" and Angels Without Wings-Battling Bullying. For more information on upcoming events, please log on to: www.kidsconfidencemystyle.eventbrite.com and https://www.facebook.com/ValeriesDailyInspirations?ref=ts&fref=ts

Check out more of what Jazmin has done and is doing on Bergen.com:

Sponsored and Supported by Jazmin Brown and more!

Come meet Jazmin Brown  while she is out supporting "The 1st Annual Kids' Confidence-My Style Fashion Show" hosted by 9 year old Mackenzie Grace. Grab an autograph and photo or two with Jaz. Feel free to talk to her about your design concepts and hear about what her future goals are! A great relaxing day filled with fun, confidence and style.

A fabulous event that encourages positive self esteem and awareness of others for all ages!

Limited tickets and ad space available for this event and for magazine purchase. For more info. please follow link to:

Come meet Jazmin Brown on November 18th while she is out supporting "The 1st Annual Kids' Confidence-My Style Fashion Show" hosted by 9 year old Mackenzie Grace. A fabulous event that encourages positive self esteem and awareness of others for all ages!

Tickets and More Information
Back
You Tube

Contact Information
Please feel free to contact Jazmin Brown's Deztani' if you would like a custom piece of apparel designed just for you or with any questions, comments, suggestions. Due to the volume of emails, please give us up to 48-72 hours to get back to you! All emails will be answered.