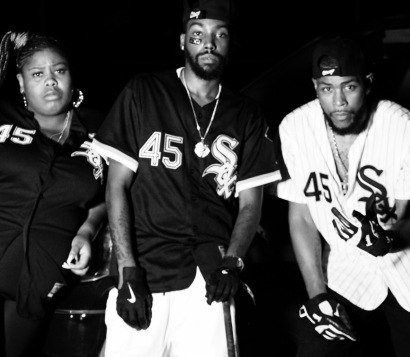 A record label Est. 2011 from Buffalo NY. Owners Dominic Pendergrass and Christina Harris push this company to have the best on their roster and also be individual artists as well…
Enlightenment Ent set out to become performers and professional Hip Hop Artists. Natural ability will only take a talented artist so far, but strong will and determination has helped push this company forward and continues to drive the artists’ development and success. Enlightenment Ent has always been musically gifted from a young age, they were singing, performing, and playing a variety of instruments. Throughout the course of their musical career, Enlightenment Ent has won over the hearts of music lovers from all walks of life; performing at a variety of venues, making loads of public appearances, all the while recording new music.

Dom.P born and raised in Buffalo New York grew up Influenced on early 90s Hip Hop and R&B. Rappers such as The Late great Notorious B.I.G , 2Pac Shakur and other NY rappers like Jay-Z fed his Mind and Soul. At the age of 13 in 2004 Dom.P started hanging around a local rap group called "Da Mobsters", with his cousin Funnie. Dom.P became very inspired by what they were doing and started testing his craft with the paper and pen and fell in love with writing raps ever since.
Dom.P's music shows the struggles he have been through living in the one of the largest poorest cities; Buffalo NY which makes his music more heart filling. He brings power to the microphone by using some of the meanest punch-lines and metaphors when he's in the booth it isn’t a question.

In 2010 Dom.P and his girlfriend/business partner Tina Harris started a recording company called Enlightenment Entertainment LLC© which was copyrighted in 2011. Dom.P and Tina Harris continued to push and find their styles of music. They shot their 1st music video in 2012 where they started to get a little recognition in their city. From there they started performing at open mics and local shows.
In 2015 Enlightenment started to expand and start doing shows in Rochester NY and Cleveland Ohio.

Dom.P is no shy guy when it comes to the stage; he brings all he got plus more. He also shared the same stage with stars such as Shy Glizzy, PnB Rock, DaeDae, Curren$y, Dub-O, Chevy Woods and more. DomP is going to continue to live out his dreams and do what’s right for the Hip Hop culture..
So far Dom.P has dropped 3 solo Mixtapes,(The Untold Story, Business Over Pleasure, and The Getaway) 1 group album (The Foundation) and a few outside collaborations and demos here and there. As of now Dom.P is looking to take his career to the next level. He is industry ready!

T Hood
Born and raised in Buffalo NY, T Hood grew up listening to all types of music. From hip hop, rap,and R&B, to blues and jazz music. Her parents loved music which grabbed her attention at an early age. In 2004 She started writing poetry which was eventually published with her high school magazine at Buffalo Academy for Visual and Performing Arts. She attended BAVPA for theatre from 6th-12th grade where she received her high school diploma in theatre arts in 2008. In 2010, T Hood started to build her own record label with her boyfriend and business partner Dominic Pendergrass also known as Dom P. Their label Enlightenment Entertainment LLC became copy written in 2011 and they signed a local rapper Freddy and a rapper from Dade County Miami Florida, Gutta. Enlightenment did several shows and three mixtapes with them but decided to go their separate ways. Dom.P and T Hood continued their journey doing their first music video VIP shot by DJ Gus in October of 2012. This is when everyone realized they were really pushing and serious about the music. They continued doing mixtapes videos and local performances and eventually teamed up with Mizz Mye and Twin 2xs. It was then thay they got called to Rochester NY in 2015 by a booking agent by the name of Sage. Sage started booking them in the out skirts of Buffalo NY. In 2016 they got recognized in Cleveland Ohio by Earth Enlightenment where they booked them to open for mainstream artists like Currenc$y, Shy Glizzy, PNB Rock, Dae Dae, Dub O, and Chevy Woods. On May 6, 2017, T Hood released her first solo project The Hood Princess on hard copies and as well as on Datpiff.com. Hood is looking to get recognition in the hip hop industry with her hardcore yet sexy sound.

A Buffalo native that was raised on the south side of Atlanta Georgia in College Park. Growing up he became infatuated with music. It's funny He never thought in a million years that he would be a rapper? Twin from Courtland Ave, nickeling and dimeing just to make a meal and a few bucks. He was a quiet kid growing up, so when he would rap the people would be so astonished that such a small kid had such a big voice and so much power with it. He started out on the street with his cousin rapping mostly promoting and writing in 2009 with Freewise Ent. Later in 2013 he became a proud and loyal member of Enlightenment Ent LLC opening up for acts such as Chevy Woods,Dub-O, Shy Glizzy and many more. Twin plans to release his mixtape soon titled "7/30 Born To Grind" which includes "Jumpman" which is a hot new collaboration between Enlightenments artists T-Hood, Dom P, and Twin 2xs himself.