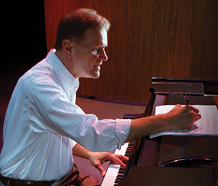 Michael Dulin is an internationally-acclaimed performer, composer and producer whose piano-based music touches hearts and crosses genres. A Juilliard School graduate, Michael has won numerous awards, including the honor of audience favorite in the Carnegie Hall International Piano Competition. His original music has twice been awarded the prestigious Lifestyle Music Award, and four of his albums have reached the #1 spot on ZMR’s worldwide airplay charts. Michael appears both solo and with orchestra in performances of classical music, yet he has also toured as keyboardist with the legendary Motown group, The Temptations. In addition to being an award-winning composer of music for radio, television, theater and film, he is in demand as a session musician and producer; Michael and business partner Daniel Whiteside own and operate PSI Studios, a digital recording facility in Birmingham, Alabama. Visit www.MichaelDulin.com for more information on Michael’s music, news and concert dates.

Michael Dulin's new album - MY BELOVED - is featured by Steve Sheppard on One World Radio. http://www.mixcloud.com/OWM/the-album-show-featurimg-my-beloved-by-michael-dullin/

A New Start for Michael Dulin

Premiere pianist & composer revealed a new side of himself today, with a website re-launch and image overhall in line with his new album. A team of industry leaders contributed to the effort, including The B Company, New Leaf Design, 5a Multimedia, and the artist's own Equity Digital.  He also announced a newsletter, which can be joined at http://eepurl.com/baqO9L or via www.michaeldulin.com

Birmingham, AL - It may sound like something from times past – romantically-inspired music full of tenderness and longing dedicated to one’s true love – yet My Beloved proves that love’s inspiration is as timeless and relevant as ever. Today, internationally-renowned pianist and composer Michael Dulin celebrates the release of his latest work, My Beloved, an intensely personal solo piano album dedicated to his wife, Jan. Equity Digital Music of Birmingham, AL, is releasing the album, which will be available for sale both physically and digitally on all major online music stores, and on the artist’s own website at www.michaeldulin.com.

My Beloved – A Solo Piano Love Story is a beautifully melodic and passionate testament to enduring love, blending classic and contemporary influences to create a 12-song collection that critics are saying "is like a long and passionate love letter" that "makes every time you listen to it feel like Valentine's Day." Fittingly, the album’s six-panel digipak is filled with insightful liner notes, romantic quotes by Ruben Dario, Plato, and E.E. Cummings, complemented by elegant images and deep red graphics designed by Matt Strieby (Newleaf Design).

To tie in with Valentine’s Day 2015, a special gift-with-purchase, a set of contemporary glass coasters, available through February 14th with each physical CD purchase from Dulin’s website.

Dulin, a Juilliard-trained pianist who has competed on the international level, effortlessly crosses genres from classical to jazz to new age, as exhibited on previous albums like Timeless, Atmospheres, and Follow the River. While My Beloved may deliver touches of Neo-Classical, Jazz and New Age sounds, one of today’s leading piano music reviewers, Kathy Parsons, avoids categorization calling it, simply, “pure solo piano heaven” and adding “With My Beloved, Michael Dulin proves once again that he’s ‘The Man’ when it comes to the piano! Let this wonderful music transport your heart to a world of love and devotion where all things are possible. Sure to be a Favorite for 2015, I give My Beloved my highest recommendation.”

Dulin’s loyal fan base had been requesting a solo piano album for years, and the music had been emerging over the last two years, ever inspired by his wife, Jan. To bring out the beauty of the piano sound, the meticulous artist decided to take a fresh approach to the recording and production process. He invested in fine tuning his 7-foot Steinway & Sons Model B Grand Piano, and consulted with pros like producers Michael Fine and Max Wilcox (renowned producer of Arthur Rubinstein’s RCA recordings) as well as the tech teams at DPA and Millennia on new microphones. Finally, Dulin settled on two DPA 4006 omni-directional microphones, a Millennia 4-channel mic preamp, and the mic placement setup recommended by Wilcox. He recorded in his own studio in Birmingham, AL, with recording engineer Courtney McGukin, followed by a highly-successful mastering session at Soundmirror in Boston, MA last October. This was a new approach for Dulin, who – as a studio owner himself - usually finalizes his own albums.

Dulin shares, “I had mastered all of my previous CDs myself at our studio, but, perhaps due to the very personal nature of this album, I was led to take My Beloved to Boston to have it mastered by Mark Donahue at SoundMirror Studios. Mark is a frequent GRAMMY® nominee, and has won the award for Best Engineered Classical Album in both 2010 and 2012. He was a dream to work with and I couldn't be more pleased with the sound.”

Dulin’s label, Equity Digital Music, is offering a sleekly-bound book and digital downloads of the sheet music to My Beloved. It is also celebrating with a robust new website, a new quarterly newsletter (http://eepurl.com/baqO9L), a gift-with-purchase offer, radio appearances, and a schedule of live concert events to share the new music. On Sunday January 25th, Dulin will be a featured performer at the Whisperings Solo Piano Radio All-Star Concert and Awards Show in Costa Mesa, CA (http://www.solopianoawards.com/). In April 2015, he’ll return to the Pacific Northwest with fellow pianist Greg Maroney, in a series of ten dates including Seattle’s historic Daniels Recital Hall and Portland’s Classic Pianos; visit his website’s concert page for full tour info and ongoing updates. He maintains a presence on most internet radio stations, and on social media including Twitter, Facebook, MySpace, ReverbNation, and YouTube.

“This is my most personal album to date. I hope you’ll be able to live your own love story through My Beloved,” Dulin says, “and that the music will inspire you to think about the true meaning of love and devotion in your life.”

All songs on My Beloved are composed and performed by Michael Dulin, ©2014 Equity Digital (BMI); total running time for the album is 59:22.

For radio airplay copies, contact Ed Bonk via LazzPromotions@rogers.com; for all other inquiries, contact Beth Ann Hilton at BethHilton@theBcompany.com

Avenue of the Stars Hotel Ballroom

Tickets and More Information
Back
You Tube