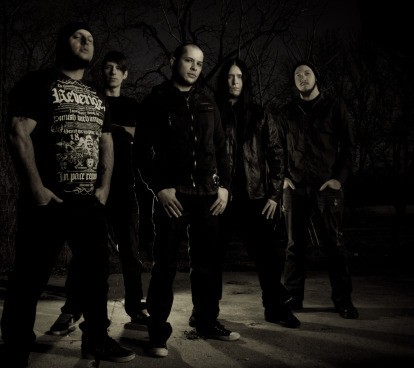 Forming in 2007 by Shaun Glass and vocalist Jeremy “Jerms” Genske, Dirge Within immediately began their domination of the competitive heavy music scene, making a name for themselves through extensive touring, earning rave reviews from the press and public alike, while hitting the road with metal luminaries like Trivium, Fear Factory, Static X, Devildriver, Whitechapel, Gwar, Kittie, 36 Crazyfists, and Nonpoint, and appearing on the Chicago stop of the 2009 MAYHEM Tour.

Following up their acclaimed debut Force Fed Lies, which drew rave reviews in the pages of Revolver, AP, Rocksound and Metal Hammer (UK), and features the singles “Forever The Martyr”, and “Confession”, which became staples on Sirius XM and various hard music radio outlets, and even made their way as playable tracks for the popular video game Rock Band. Dirge issued a three song EP titled Absolution, in August, giving fans a taste of what’s to come from their forthcoming sophomore release.

In stores April 10 via THC/Rocket Science/RED, There Will Be Blood showcases what fans of Dirge Within are already familiar with; powerful grooves, strong hooks and punishing guitar riffs, with an evolved songwriting and technical prowess far beyond its predecessor .

Says vocalist Genske, “The songs are heavier, smarter, and more melodic in parts. Some are even a little slower! There were no rules when we were writing.. at all. No holds barred. Whatever came out, came out. And I think it's gonna make a really good, well-rounded Metal album."

Produced by the band, with Destrophy frontman Ari Mihalopoulos, Blood delivers as promised, with standout tracks like “Memories”, “As We Prey”, “Vultures”, and “There Will Be Blood”, building on the rock solid foundation Dirge has already laid. With the recent addition of drummer Frankie Harchut and guitarist Chuck Wepfer, Blood is set to pick up where their debut left off, as a pummeling slab of melodic, modern Metal.
Dirge will hit the road in Spring to support Blood, and the first single “Memories” has already started to work its way onto Hard Rock playlists throughout the country.

“I’ve seen these guys live and they kill! The new tracks I’ve heard are awesome and will not disappoint!!! HELLYEAH!!” - Vinnie Paul.

There Will Be Blood Album Release Date Revealed

Chicago's DIRGE WITHIN has set "There Will Be Blood" as the title of its sophomore full-length album, due on April 10 via Rocket Science Ventures/THC: Music. The CD was recorded at Mercenary Studios in Zion, Illinois with engineer Scott Creekmore and producer Ari Mihalopoulos and is currently being mixed at Inner Light Studios with Ari and DIRGE WITHIN guitarist Shaun Glass.

Guitarist Matt Szlachta recently left DIRGE WITHIN to continue to focus on his passion for teaching guitar to his students and for other personal reasons. He has since been replaced by Chuck Wepfer.

"There's no bad blood at all, man," said vocalist Jeremy "Jerms" Genske. "We're all still good buds and very close. His head and heart just weren't in it anymore, and he wanted to go back to teaching. He really loves it, and that's where he felt he had to be."

DIRGE WITHIN's forthcoming album will be the band's first to feature drummer Frankie Harchut and bassist Jeff Paulick (bassist/vocalist of LAZARUS A.D.), who has been filling on bass duties on tour with DIRGE WITHIN.

"I am very excited about the new songs we've written for this new album, and that people will be able to check out my style of playing a little more," stated Harchut. "We worked our asses off writing these new songs, a lot of long nights, and I'm personally stoked to have our fans hear 'em. I really think they're gonna be into it." Jeremy added, "The songs are heavier, smarter, and more melodic in parts. Some are even a little slower! There were no rules when we were writing at all. No holds barred. Whatever came out, came out. And I think it's gonna make a really good, well-rounded metal album."

DIRGE WITHIN's "Absolution" EP was made available on August 16, 2011. The three-song effort gives fans a taste of what's to come from the band's forthcoming sophomore album.

The Vogue ~ Indianapolis, IN