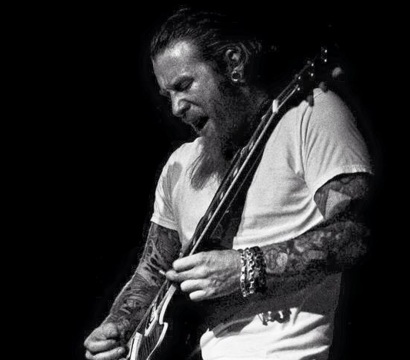 At the age of 8, attending private school where music was a focused part of education, Chuck found his love for music in the form of clarinet. Unable to afford lessons the schools band director and music director gave chuck free lessons. Soon there after he sat first chair in an 80 piece orchestra and never relinquished that position.

In 1996 against his will, his friends coerced him to attending a free Metallica concert. That was the day his life truly changed forever. With a new found love for music, the next day Chuck purchased a Memphis Guitar, Crate amp. Since that fateful day, Chuck has strived for perfection in his continuing pursuit to be the best guitar player, vocalist, and songwriter that he can be. The original goal for chuck in playing guitar was simply to play the Metallica riffs he had heard the night before, but now it’s so much more.

Chuck has been well regarded as a very proficient guitar player, noted for his versatility and adaptability in so many different styles. Chuck has taken lead Guitar duties in a several local bands including: Kenny Rego and The Law of One, founding member, lead guitarist/vocalist/songwriter of The Cash Cartell Band, and recently joined Failure by Proxy in 2017. Due to Chuck’s musical adaptability he has made several guest appearances with local bands such as Roswell, Banjo Bones, California Riot Act and many others.

With over 20 years of experience, Chuck is looking forward to the next 20, currently in the Vet-Traxx Project studio working on Failure by Proxy’s first full length album. The highly anticipated album is scheduled to be released in 2019.

Chuck has had the honor and pleasure of sharing the stage with national acts such as: Jonny 2 bags of Social Distortion, Messer, Gemini Syndrome, Oleander, FLAW, Smile Empty Soul, The Mendenhall Experiment. In January 2019, he and Failure by Proxy will be performing as main support for Puddle of Mudd at the notable Ace of Spades in Sacramento.

When Chuck isn’t busy with Cash Cartell or Failure by Proxy, he volunteers his time as a Guitar Instructor at Vet-Traxx Project, a non-profit organization to help provide music therapy to disabled veterans suffering from PTSD.

When asked “Why Schecter Guitar Research”?

“That’s simple, the quality and playability is unparalleled. The first time I picked up a Schecter guitar I was impressed how fast the neck was, and the setup was amazing considering it was on a rack in a local music store. I couldn’t believe how inexpensive it was in comparison to another guitar manufacturer that cost 4x more, and the playability of the Schecter was superior!”

A great music festival in support of Vet-Traxx Project Inc.  A non-profit organization that helps provide music therapy to veterans suffering from PTSD.

Come party with Failure by Proxy at the Halloween Party!!!  $100 given to the best costume!

Tickets and More Information
Update Required To play the media you will need to either update your browser to a recent version or update your Flash plugin.
Download Download
Back
You Tube
Back