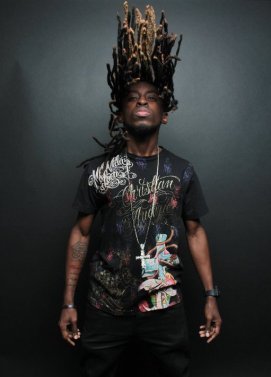 One of the most popular and innovative dancers of today’s Dancehall scene in the USA is Brooklyn-based Blacka Di Danca. At the mere age of 23, Blacka has already performed at stage shows, festivals and carnivals across the United States, Canada and Hawaii. He has been on multiple tours, domestic and international, with the Reggae artists New Kingston, Collie Buddz and Gappy Ranks. In November of 2008, Blacka won the title of “Dance Hall King” at Binghamton University’s Annual Carnival in front of thousands of spectators. From there, he has been featured in six music videos for his dancing, including Busta Rhymes's "Twerk It" remix video featuring Nicki Minaj and Pharrel. In July of 2010, Blacka made his debut on National Television, performing with Mr. Vegas and New Kingston on the CBS Early Show for a 3 million plus audience. In November of 2010, Blacka taught a Dancehall class at NYC’s Fashion Institute of Technology (FIT). In December of 2010, Blacka participated in NYC's Dance-A-Rama competition and again came out on top to win the title of "Champion of Champions". In December of 2011, Blacka taught Dancehall workshops in Moscow, Russia as well as judged and performed for Moscow's Dancehall contest. In February of 2012, Blacka returned to Russia to teach international works amongst choreographers from Haiti, France, Jamaica and Brazil. In
March of 2013, Blacka ventured off on his first solo European/UK tour teaching Dancehall classes through 8 countries over 6 weeks. He has toured Europe twice teaching workshops and is planning a fall tour. In June of 2013, Blacka was featured as a dancer/choreographer on cablevision's FUSE TV for the television show "The Hustle After-party". Blacka continues to add new projects and endeavors very often.

Blacka’s dance influences stem from Michael Jackson, James Brown, Bogle, Elvis Presley, Usher and Chris Brown. He has been in the Dancehall scene for 10 years and has proven to be consistent in all of his efforts. He has gained many international friends, fans and recognition in such locations as: Jamaica, Trinidad, Africa, Panama and the United Kingdom. Many of these newly found relationships have stemmed primarily from his YouTube videos that he posts online. Dancehall is his passion. His vision is to spread the art of Dancehall dancing to global measures through love, hard work and dedication.


Want to dance with Blacka?!

Blacka teaches Dancehall dance classes every Tuesday and Thursday in NYC at DANY studios (305 W. 38th street between 8th and 9th avenues). Send an information request on this page for more information.