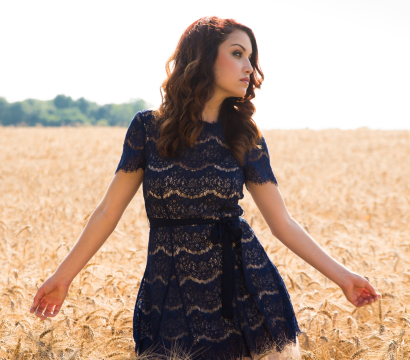 Despite what you may have seen and heard, Country vocalist and Internet phenomenon Alexandra Kay is NOT an overnight sensation. With 30+ million plays collectively of her videos in a 60 day period she has generated a lot of excitement among fans and in the music community, but many incorrect assumptions have been made about this beautiful brunette chanteuse.

The social media darling, Alexandra is currently recording 10 music tracks in Saint Louis and Nashville. A mix of five country classics and five brand new songs, the music is anxiously awaited by her millions of fans.

Born in 1991 and growing up about 40 minutes from St. Louis in Waterloo, Illinois, Alexandra has two sisters, one older and one younger.

At 15 she began writing songs as a way to cope with being a teenager, relationships with friends and dating. “I kept the songs to myself mostly. I’d let a few friends hear them. “
Like her sisters, Alex was athletic and a standout at softball. “I grew up surrounded by athleticism. I enjoyed playing softball, just as my sisters had, a commonality that we shared. All three sisters had college scholarships for softball offered to them.

“I was sort of the black sheep for a while,” Alex noted, “my parents wanted to me go to college and softball offered me that opportunity, but I couldn’t play college softball and take the classes in performance and music I wanted at the same time.”

Alexandra got her start as a “performer” in musical theater. She worked eight years as a performer, acquiring an agent and doing voice overs, indie films, music videos and commercials for brands like Converse, before being accepted at the New York Film Academy. It was during this period that she was also offered a scholarship for softball. After a lot of soul searching she made the choice not to continue her theatrical pursuits, nor softball, as she had decided to focus on music.

“It was kind of a leap of faith for me, I play a little guitar and keyboard but not well,” she noted. “I’m taking guitar lessons, and that helps me in my songwriting.”

In 2011 Alexandra entered the American Idol contest, getting through the first three rounds before leaving the show.

Country music has always been her chosen genre, but frustrated by the lack of county music opportunities in Saint Louis, Alexandra signed with an indie label that was focused on pop, R&B and hip hop. “I spent a lot of time working with rappers, writing and singing the “hooks” for their songs.”

“St. Louis has a lot of very talented rappers, including Nelly, who I spent some time in the studio with. I made a lot of friends in R&B and hip hop hat continue to this day.” Alexandra was sure she wanted to be in country music, but her label’s vision was that she should be a pop or R&B artist.

In 2013 the label released a single and video of Alexandra singing “No More”. The song was a radio hit, spending three weeks at #1 on the New Music Weekly Top 40 pop chart, also scoring at the top of Hot AC and Hot 100 charts. The music video to “No More” has been played over 500,000 times. During this period she opened for Machine Gun Kelly in concert.

Frustrated that the label was pulling her further and further away from country music she left in 2014. “They wouldn’t let me focus on my own music, so I had to leave.”

Alex had already turned her song writing skills to country music early in 2014. “I’ve always felt that music, especially country music, has been a blessing in my life. Country music has a strong emphasis on the lyrics. That’s what people relate to, that tears your heart up, or makes it soar. That’s what drew me to country music in the beginning and it’s very important in the songs I choose.”

Starting her country music career independently at 22, Alexandra began recording cover videos of many country music favorites and posting them on her Facebook fan page which has nearly 213,000 followers to date. Her videos are often viewed by hundreds of thousands of people every week, including 3.6 million for her cover of Tim McGraw’s “If You’re Reading This" and 12.5 million views on her cover of Dolly Parton's "Jolene". Her newest song, an independently released acoustic version of “Better than Goodbye” was recently released to rave reviews. It has garnered 200,000 plays internationally on video.

In 2015 St. Louis country radio station 93.7 The Bull held a contest to select a local performer to open for their Concert in the Corn. Contestants entered by sending a video to the station, and the best videos were put up on the station web site. Alexandra won by a landslide, according to station personnel. After winning the contest, on November 7th 2015 Alexandra performed, opening for country stars Broseph E Lee, A Thousand Horses and Thompson Square. Alexandra's performance was given rave reviews and talked about on the radio for weeks after.

Alexandra’s passion for country music has been growing from a very early age. She has already shown the world she can accumulate millions of fans. She stands ready to make her mark in radio and national touring.

With near perfect pitch vocals and a powerful and distinctive delivery Alexandra has captivated audiences throughout the world with her videos. Drawing large crowds everywhere she performs, Alexandra has proven that she can turn social media recognition into an adoring fan base.

Alex is a strong believer that every fan is incredibly important and prides herself on maintaining true to her musical roots and fans. Her new country CD is currently in production and is due to be released soon. Tour dates are being solicited nationwide and are listed under the Shows tab of the web site www.alexandrakaymusic.net.

For additional information Alexandra’s Electronic Press Kit can be found at http://www.artistecard.com/alexandrakay

Waterloo Grad Making A Name For Herself In Music

What started as a passion for creative writing has morphed into something beautiful for Waterloo High School graduate Lexi Krekorian.

Krekorian, known by her artist name "Alexandra Kay," has found success in the music industry with a hit single after being signed to a record label.

"I'm not one of those kids who has been singing their whole lives," she said. "I was a writer first."

Krekorian won creative writing contests when she was younger, and her parents realized she had a gift for it.

Her journal entries turned into lyrics, and she wrote her first song at 13 years old.

"It was the only way for me to really get my feelings out," she said. "I kept it to myself for a year."

After some time, she showed the song to a few friends.

"You don't know you can singing until someone tells you you can," she said.

Krekorian never planned on singing as a career choice, but knew it was something she enjoyed.

At WHS, she started doing theater productions and got involved with Belleville community theater shows as well.

She was also accepted into the New York Film Academy, but didn't receive enough financial aid to make attending feasible.

Krekorian taught herself how to play guitar, found people to sing with her, and worked with several different managers and five vocal coaches to develop her craft.

Now, she has a record deal and a music video with more than 118,000 views on YouTube as of this writing. She signed with Nettwork Entertainment six months ago and the success has been growing steadily ever since.

"It's absolutely crazy," she said. "The video is really cool because 85 percent of the views are from overseas."

The music video for her single, "No More," has only been on Nettwork Entertainment's YouTube channel since the end of October and is currently on 60 radio stations nationwide.

She was also featured on FOX2 TV news in early November during the "Band in a Box" segment with host Tim Ezell.

"It was my first time singing on TV and I was so nervous," she said "I had never realized how hard it is to get acoustics and levels right in a rooms like that."

Next week Krekorian is flying out to Los Angeles and will get to attend the biggest music event of the year, the Grammy Awards.

"I just found out I was going to the Grammys on Monday night, and I was so excited I couldn't sleep," she said. "It's going to be amazing."

The following week she will fly to New York.

As for the rest of the year, Krekorian will be going on a mini radio tour and scheduling shows.

"I'm enjoying myself and learning so much," she said. "At this point, I'm like a kid in a candy store."

Live in studio performance and interview on The Kelly and Ken Show 100.6 The Farm Radio.

Big Daddys in Belleville IL during Art On The Square weekend from 7-11pm.

The Weingarten in Belleville IL