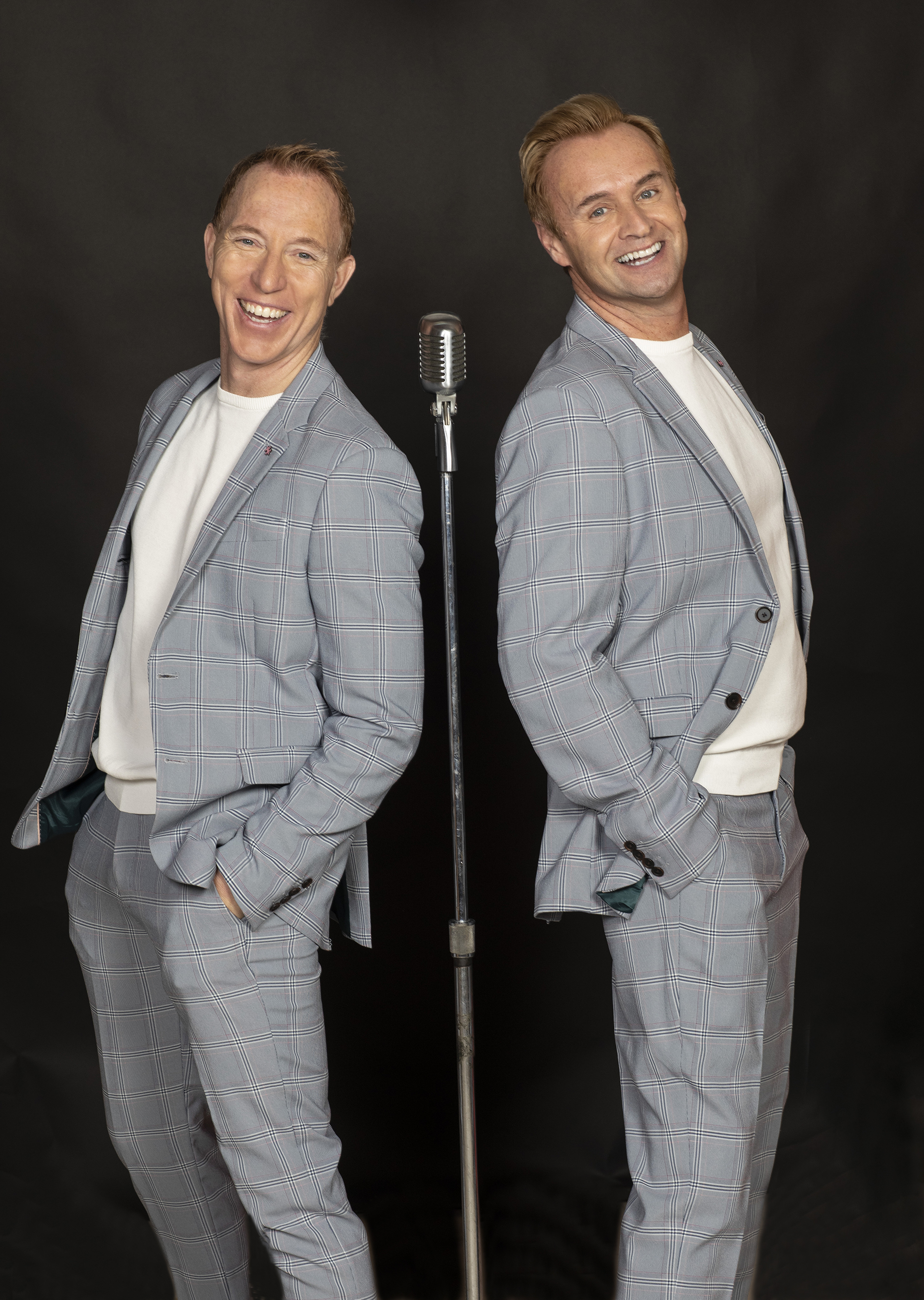 As best friends of similar backgrounds, experiences, and musical tastes, their show business careers give them the opportunity to work in a myriad of entertainment venues including regional theatres, casinos and cruise ships.

Brent and Steve’s vocal skills and talent are evident through their unique harmonic blend. The contrast of Brent’s lush baritone with Steve’s sparkling tenor, the show’s warmth and natural rapport shine through in ways that only two long time chums can have.

Born and raised in Nebraska, Brent never thought in a million years he would pursue a life of singing and dancing. He is so glad destiny brought him down this amazing road.

He has appeared in lead and ensemble roles in a variety of Off-Broadway and National Tours including: Radio City Christmas Spectacular, Smokey Joe’s Café, Annie Get Your Gun, Hello Dolly! and Kiss Me Kate to name a few. He has also had the opportunity to “bare it all” numerous times in the acclaimed “Broadway Bares” in NYC under the direction of Broadway Director/Choreographer Jerry Mitchell.

Brent has appeared as a singer in Las Vegas, Atlantic City and on cruise ships including: Seabourn, Silversea, Crystal, RCCL, Radisson Seven Seas, Premier and Regent. He sung back-up for legendary Ben Vereen and been a back-up dancer for the “coochie coochie” celebrity Charo. Numerous TV/Film, Commercials & Printwork. One of his favorites was “The Concierge” where he co-hosted with Alicia Minshew of “All My Children” fame.

Steve began his career on-stage as an 8-year-old Frederick Von Trapp touring the country with I Dream of Jeannie’s Barbara Eden. With his Actor’s Equity card in hand, he continued to perform getting a BFA in Musical Theatre at Otterbein University. From there he was one of the founding members of the acclaimed Cardinal Theatre Company in Chicago and the resident director for several years at The Northern Lights Playhouse prior to moving to New York.

Among his Broadway credits, Steve played “Kenickie” in Grease opposite 13 stars from Film, Television and Pop Music. National European Tours include “A Christmas Carol” with Brian Keith, “My Fair Lady” with Academy Award Winner Maximillian Schell and the pre-Broadway Tour of “Little Women” with the Legendary Elaine Stritch. Other stage roles include Billy in “Anything Goes”, Vernon in “They’re Playing Our Song” , Albin in “La Cage Aux Folles” and multiple productions as Tony in “West Side Story” and Joseph in “Joseph and the Amazing Technicolor Dreamcoat”.

Steve has worked as a singer in both Las Vegas (including a duet partner for Sheena Easton at the MGM Grand) and Atlantic City. Cruise lines including Silversea and American Hawaii. TV and film work includes the appearances on The Tony Awards, Today Show, The Rosie O’ Donnell Show, Sex in the City and various commercials and feature films.

Sing, Swing, and Soul
2 of a Kind’s signature show “Sing, Swing, and Soul” evokes the famous male duet partners, Frank Sinatra and Dean Martin, Bobby Darin and Johnny Mercer, and the Rat Pack. The show is a musical journey of classic and contemporary crooners including Harry Connick Jr., Paul Anka, Michael Bublé, Frankie Valli and the Four Seasons and John Legend. Songs include: “Me and My Shadow”, “Ain’t that a Kick in the Head”, “Home”, “Time After Time”, a high energy Motown Medley and many more great tunes.

MANILOW - THE MAN THE MUSIC THE MAGIC
Join 2 Of A Kind as they pay tribute to legendary American singer-songwriter, arranger, musician and producer with a career that has spanned more than 50 years. The Guys share insights in the icon's road to success with hits including "Mandy", "Can't Smile Without You", and "Copacabana(at the Copa)", a barrage or masterful ballads, his surprisingly well-known commercial jingles and stage musicals. This show leaves no doubt for Fanilows to converts, of why the magic of Manilow's music brought 15 Grammy Award nominations in the past 5 decades.

Broadway to Silver Screen
“The Guys” go back to their roots to visit the Broadway songbook and film soundtracks. Stage shows transferred to huge cinematic hits and fan favorite films remounted as Broadway productions. From golden era feature films like Thoroughly Modern Millie, On The Town and Guys and Dolls to smash hits of Jersey Boys, Mamma Mia, and The Wiz. Plus, a special tribute to Disney musicals from the big screen and the Great White Way.

Elvis Revisited
2 of a Kind celebrate the King and bring new light to worldwide favorites you know and love. Along with traditional versions, experience a fresh look at songs Elvis fans know so well. Featuring: “You Ain’t Nothing But A Hound Dog”, “Viva Las Vegas”, "Bridge Over Troubled Water”, “You Don’t Have To Say You Love Me” plus a premier nod to the King’s film career.

The Boxed Set
The “greatest hits” of all four of 2 of a Kind’s show featuring the best of the best. A tantalizing tour of musical styles sure to please any audience. The guys take you on a ride of fan favorites from Discs 1 thru 4 allowing everyone in the crowd to pick their own favorite before the curtain’s down.